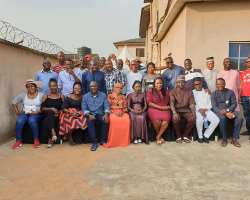 All roads led to the Lagos venue of the 28 Years Reunion of the prestgious 1991 set and Alumni of Angus Memorial High School,Igbobi-Yaba, Lagos, Nigeria, tagged "AMOSA '91 Reunion of Esteemed Professionals".The convocation commenced with the school anthem which all alumni members chanted with nostalgic pride.

A prominent member of the set,Mr Akintunde Akinjare, in company with his wife, played host to other Angusians who graced the occasion in his palace.

Welcoming members to the 2019 get-together, the substantive President, Mr Segun Akinniran emphasized the essence for the Association to have a clear vision.He said " we need to have an election to usher in new executives", noting that there was the need to also open the association's bank account "to facilitate an endowment fund for the less privileged". The endowment fund is to give back to Angus Memorial High School, especially the less privileged, Akinniran declared at the weekend.

The Assistant Head Boy of the set,Mr Olubiyi Anwoju, while commending efforts of the president and other executive members,charged the class to be focused and united.He maintained that this would bring about the right networking for the alumni in the near future.

Describing 28 years as huge in the life of any human being,Anwoju stressed the need for AMOSA '91 Set to be thankful to the Almighty God for adding those years to their lives after high school. The Public Relations Officer,Mr Tayo Adesanya who doubles as Chairman,Planning Committee,AMHOSA 40th Anniversary, underlined the importance of a well represented '91 set in March 2020. " '91 Set is a set all other sets envy",he enthused while expressing deep appreciation for financial support of the Alumni prigramme by Segun Akinniran, Adeola Adeduro, Opeyemi Kabiru Ogungbo, Jamiu Onasanya and Kola Ikueonomore.

The Alumni were treated to a sumptuous meals by the Akinjares, the hosts of the 2019 edition of AMOSA '91 Reunion.