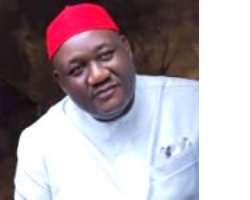 The immediate past Deputy Governor of Imo State, Prince Eze Madumere has cried out over the sudden passing of Senator Benjamin Uwajumogu, describing it as most devastating.

Prince Madumere’s thoughts were contained in a statement by his Special Adviser on Media & Publicity, Uche Onwuchekwa.

The former deputy Governor said it came to him as a rude shock, describing Benjamin Uwajumogu’s death as a big loss to the State, All Progressives Congress family and Nigeria at large.

The message reads:
“The former Deputy Governor of Imo State, Prince Eze Madumere with heavy heart, condoles the good people of Imo State, the All Progressives Congress family and Nigeria at large over the painful exit of Senator Benjamin Uwajumogu.

“It is most devastating hearing about his transition. At first when it popped up on social media, I described it as fake news taken to a dangerous level. Not until later when I confirmed that it was true.

“It is indeed a big loss to Imo people, All Progressives Congress family and Nigeria at large.

“Senator Benjamin will be remembered for his resolute stance on issues that are of public interest. He was a fearless voice, especially on issues that were critical to the welfare and peaceful co-existence of the people. At the Senate, he was a voice that spoke for Nigerians.

“He was humble and accessible to all, especially our youths and everyone is in pain and yet to come to term with this sad tale of nature.

“We pray for God to grant the family and all of us the fortitude to bear the irreparable loss as we pray for the repose of his soul.