we need to decolonize beauty standards from Africa to stop the skin bleaching epidemic. 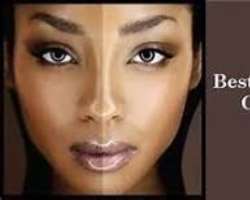 According to the WHO (World Health Organisation) 77% of Nigerian women are bleaching their skin.

Congolese friends call it “tchoko”, my long-time idol Fela kuti called it in a song “yellow fever”. in this article, we are going to call it exactly how it is: skin bleaching. Without giving it a broad explanation, skin bleaching is the process where a person deliberately destroys the melanin in the skin with the goal to achieve a lighter look, by using different products such as soap, gel or cream or by indulging in different process such as plastic surgery, pill treatments or chemical bathtubs.

The reason why I shouldn’t give a broad introduction about what skin bleaching is, is because finally, after years of silence different researchers have come forward with proof of what the mental and physical damages can be of skin bleaching. Whether you have read that Amazon finally banned skin bleaching products from its website or whether you’ve seen a video gone viral where a lady is scratching her skin after laying in a bathtub full of chemicals, the issue of skin bleaching is out there, but the discussion is still small-scaled in the international community, and within the Africans, this topic is still considered to be a taboo.

My fascination with skin bleaching started when I started to shop by myself in Matongé. When I was fifteen, I decided to wear my natural hair because I saw myself as an African and I wanted to make sure this was viewed the same by others. But mostly, because I didn’t want to be a victim of western beauty standards which promoted straight hair and white skin. I have been shoping regularly in Matongé for my hair products in the past 10 years. Each year, I observe more and more skin bleaching products and brand names that made me slightly uncomfortable like “fair and lovely” or “caro”- if you are not familiar with Nigerian pidgin and reading this, Caro means a hot girl- Wizkid sang a song called “caro” as well.

That is when my privilege as an African with a lighter skin complexion comes in: I felt uncomfortable - not wondering why I had black sisters and brothers who are willing to expose their skin to damaging products just to be lighter. I didn’t wonder why I found skin lightening products in an African neighbourhood in the capital of Europe. In my naïve position as a “light skin” girl, with fair skinned Moroccan mother and a dark skinned Nigerian dad, I knew the colour of one’s skin could be a big deal. But in all honesty, I didn’t understand the pressure to be lighter, even though I knew skin bleaching is being practiced in both the Moroccan and the Nigerian culture. According to the World Health Organisation, 77% of women in Nigeria use skin lightening products, the world's highest percentage. The fact that all around the world, women are trying to be lighter at all cost but so little light is being shed on this issue is problematic. If you take the Kylie Jenner challenge, where young, mostly white teens were trying to plump their limps by sucking into a glass, you probably remember the controversy.

This made me wonder: would skin bleaching still get this little international attention if European women were doing it?

It made me to attempt to understand where this linkage of lighter skin with beauty or success came from in the first place. Yes, black pop culture promotes a certain type of girls, Béyonce wouldn’t be Béyoncé if she had darker skin - and in Nollywood movies there are a ton of storylines where the lighter women are better, more successful and prettier but how come if most of the African women have a darker complexion? The importance of being pale could be dangerous and addictive, so how did this phenomenon develop in Africa were most the population is dark skinned? The simple answer is colonialization and slavery. An American Sociological Society paper explains that: “To justify racial slavery, slave-holding interests espoused a white supremacist ideology which held that persons of African descent were innately inferior to whites. Whiteness became identified with all that is civilised, virtuous and beautiful.”

It so that light skinned slaves were separated from dark skinned slaves to work inside or closer to the masters. As a light skinned slave, you were treated better by the slave masters. If we look closer into colonization processes, lighter skinned tribes were often the one closer to the colonizers. Let us take Rwanda for example, when Europeans arrived, the terms "Tutsi" and "Hutu" took on racial meanings. Rwanda was colonized by Germany in 1894. Since they thought that the Tutsi had more European characteristics, such as lighter skin and a taller build, they put Tutsis in roles of responsibility. After World War I, Rwanda became a UN Trust Territory under the rule of Belgium. The Belgians continued the superior treatment of the Tutsi’s and in 1933 they made it obligatory to carry cards that labelled each person as Hutu, Tutsi, or Twa. But that is not the only case where light skin tribes were getting more power, or simply a better position, it happened across Africa.

But why is it still happening today? I am not in the position to say that it is a form of a self-hate, or internalised racism, that is not the aim of this article. The aim of this post is to try to explain to you why we should have the discussion of skin bleaching without any taboos, shame or judgement. This is still happening today because Africans still need to be decolonised, not just at economic and political level, but also at a cultural level. The European beauty standards are dominant and big companies are taking advantage of this. When people think about companies still profiting from the colonialism, they often forget the beauty industry. The skin bleaching industry made almost 5 billion dollars in 2017.

This highlights that supply is not the biggest issue, but the demand. Companies like l’Oréal, Nivea and Garnier are all producing skin lightening products, not because they don’t make enough profit within the “classic” market, but because there is a high demand of skin bleaching products.

That the current African beauty standards implies having European features, is the real problem that needs to be tackled. This can be linked all the way to the colonial period, and to see how damaging colonialism was not only to the land, future economy, political structures and culture, but how it brainwashed generations into thinking that beauty and success is only possible when you have a lighter complexion. Making skin bleaching products illegal is unfortunately not enough. If we consider the Diaspora in Europe, skin bleaching products are being sold while most of them contain illegal substances. We should promote dark skinned women by using them in commercials and in social media. The ultimate goal is to educate all our children that there is no need to judge someone by the colour of his skin, or by his looks in general.

Decolonising the mind by Ngũgĩ wa Thiong'o is a book describing the importance of restoring African culture, which for me still need to happen. Wa Thiong’o discusses the restoration of culture by restoring African literature and language, I go further and say we must restore African beauty standards.