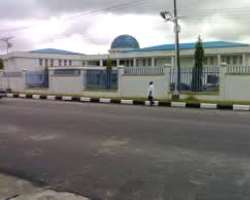 The order came following a motion moved by House Leader, Hon. Victor Chukwu, which the lawmakers unanimously adopted the resolution for the arrest of the Council Chairman.

Addressing newsmen at the Assembly Complex, the Deputy Chief Whip of the House, Hon. Benjamin Ezeoma said the council chairman, Odah, a constituent of Onah who is representing Ohaukwu south constituency arrived when they were in a committee meeting with Hon. Onah

Hon. Ezeoma explained that the Council chairman invaded the office and started accusing Hon. Onah of tampering with the list of nominee's for the position of the Management Committee sent to the House for screening.

He said that after a brief altercation between the Council chairman and Hon. Onah, the Chairman, Hon. Clement Odah slapped Hon. Onah thereby disrupting and bringing their meeting to an abrupt end of which they moved to the chambers for a plenary session

Hon. Ezeoma described the action of Odah, the council boss as an assault not only on Ebonyi State House of Assembly, but also on the legislative, arm of government in general.

In an interview, Hon. Chinedu Onah who is the Chairman, House Committee on Information, confirmed he was assualted by the Chairman, for doing nothing.

Onah said the Council Chairman confronted him while he was performing his legislative duties with other Lawmakers and accused him of stepping down his nominees who came for screening in the House.

"He came to our committee room this morning where we were taking some MDAs on budget defence and started shouting that the small boy, which is me, stepped down his nominees as members of Management Committee.

"That he has come to tell me that I must clear them. But unfortunately, I didn't step down his nominees. That's not my Constituency. I am not representing Clement Odah. I am representing Ohaukwu South State Constituency.

"Besides, I have not stepped anybody down in the course of the screening. I owe him no appologies to have done that, because that's my job to represent my people. But unfortunately, I didn't do that.

"One thing is that I didn't bother to react because I want the law to take its course. That's exactly what happened", Onah said

Reacting, the Ohaukwu Council Chairman, Hon. Clement Odah said he only came to the House to make inquiries why four appointees of the Governor from his Council were not screened and thereafter exchanged pleasantries with his Lawmaker friends and left.

On whether he was aware of the resolution of the House which ordered his arrest and medical examination to determine his mental status, he said, that couldn't have happened as there was nothing to warrant such a resolution.