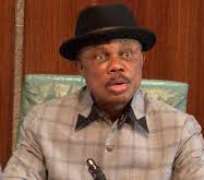 A rights group, The Human Rights, Liberty Access and Peace Defenders Foundation, on Monday chided the Anambra State governor, Willie Obiano, for allegedly spending N1.35bn on beautification of major cities in the state for the Yuletide.

In a statement, the leader of the group, Uzor Dede, accused governors of the South-East geopolitical zone of profligacy, calling on the Economic and Financial Crimes Commission to beam its searchlight on them.

It lamented what it called “the abysmal performance” of the governors, stressing that their states were facing huge infrastructural decay.

The nongovernmental HURIDE queried the rationale behind spending N1.35bn for Christmas decorations, whereas only N181m was allocated to the rehabilitation of bad roads in the 2019 budget.

It said the action showed “the insensitivity and callousness of the government,” wondering what benefits the Christmas and New Year decorations are to the economy and welfare of the citizens.

The Anambra State Government has denied the claim.
Speaking about the decoration, HURIDE said, “The sane thing to do was to channel the entire money to rehabilitation of damaged roads in various parts of the state, particularly in Onitsha, the commercial nerve centre of the state where virtually all the roads are in deplorable conditions.

“It’s pathetic because, throughout the year, the Anambra people have been crying for roads rehabilitation, but the government allocated a paltry sum of N181m to it.

“No wonder all the roads in Onitsha still remain unattended, in spite of promises by the governor and his aides to rehabilitate them before Christmas.

“We are, therefore, calling on the EFCC to beam their searchlight on the finances of South-East and South-South states, to restrain the excesses of the governors in using their funds for frivolous things such as Christmas decorations, when roads, education and health sector are suffering,” Uzor stated.

Adinuba said the Yuletide decorations in the state were being done by corporate organisations (free of charge) as part of their corporate social responsibility to the state. Punch