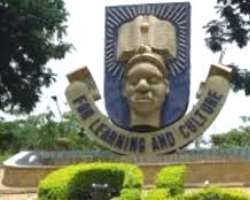 The Obafemi Awolowo University, (OAU), Ile-Ife has lost another lecturer Dr. Victoria Oluwaremilekun a day after one of its lecturers, Professor Jerome Elusiyan was killed by some hoodlums.

The Nigerian Voice gathered that late Oluwaremilekun who was the Acting Head of Department of Dramatic Arts died suddenly on Sunday.

Oluwaremilekun directed this year's Convocation play which was staged five days ago, was also on Saturday, a part of the academic procession of the grand finale of the University's 44th Convocation.

The Public Relations Officer of the University, Abiodun Olarewaju confirmed her death. The OAU spokesperson said her death was painful.

He said "Less than forty eight hours after we lost a Professor of Paediatrics, Professor Jerome Elusiyan, to the cold hands of death through the instrumentality of unknown gunmen, it is too painful for us as a University to tearfully break the unpalatable news of the demise of another promising academic and a prominent member of OAU community, Dr. Victoria Oluwaremilekun ADENIYI"