Femi Fani-Kayode Debunks Rumour Of His Defection To APC 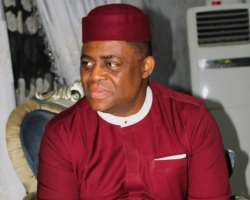 In a Statement made available to The Nigerian Voice, Chief Femi Fani-Kayode denied ever nursing such ambition as he has dedicated his life "to oppposing the APC and those that are in their ranks for the rest of my natural life and I will NEVER join them no matter what!"

Read Below his statement:
The suggestion that I have joined the APC is not only false but it is also deeply insulting. Those that are peddling this fake news should bury their heads in shame.

With what we have witnessed over the last 5 years I would rather die than join a filthy, rat-infested sinking ship like the Almajiri Peoples Congress (APC).

Those that claim that I have joined them and that seek to link my good name to such a bloodthirsty, blood-lusting, accursed political association of Boko Haramists, Fulani herdsmen, genocidal maniacs, ethnic cleansers, mass murderers, ethnic supremacists, religious bigots, cow-lovers and corrupt treasury looters that have brought nothing but death, division, misery, poverty, incompetence, shame and destruction to our nation and our people will burn in hell forever!

I am committed to oppposing the APC and those that are in their ranks for the rest of my natural life and I will NEVER join them no matter what!

They are nothing but darkness whilst I stand for the light of God and truth: there can be NO fellowship between light and darkness.