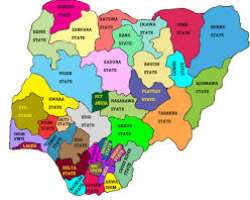 So there was this Hausa man who want to see a Yoruba native witch doctor (babalawo), of the native doctor he requested a voodoo that would give him power to eat in a restaurant without paying his bills, the native doctor obliged him.

So he went to this Igbo eatery, ate to his fill, the choicest of meals. After which he preceded to leave, he passed everyone, and was at the last exit when he was reminded that he needed to pay his bill. There he was standing, hand in pocket, frolicking the voodoo item and asking them must he pay, why should he pay blah blah blah. The accountant looked at him and asks, Oga do you want us to detain you till 2020.

This was happening in 2019, the charm for free food had failed him. If he wanted food in 2020 he needed to work and work hard or else it would be requiem.

We are likely witnessing the end of Nigeria, as we know it. Proving this proposition correct would require good sense and restraint on all sides. In the end, the possibility of coexistence would have vanished in clouds of tear gas and flames from petrol bombs.

There is the belief that the cause of the current crisis in Nigeria is social and economic inequality, and that if only that problem could be solved Nigeria would be one great country and nation.

There is truth in this belief. Nigeria has one of the highest concentrations of wealth in the world especially political and politicians’ wealth. Young people cannot get good jobs or afford the basics of life. As a result, they are blocked from getting married and having families.

Now before men and women of the state security come looking for me, for treasonable comments, here is the crux, it is 2020 in some barely two weeks. The life of a 30 year old Nigerian is a requiem mass.

We may argue that economic and social inequality has existed for decades, and little or nothing was done about it. Nigeria has many bright people who understand how to correct the various elements of the inequality problem. What has and continues to be missing is the political will to do so. However this is just a tiny bit of why we are here in the first place.

Some decades back I recall we were all brain washed that it was all going to happen in the year 2000, health, road, education, shelter, everything would be readily available and free. I still see the vigor with which that phrase was pursued. Education for all by the year 2000, health for all, housing for all, everything was going to be free for all. The closest we got to was the millennium bug and all the noise that followed it.

Before the year 2000 magic, former dictator Gen. Abacha assembled the best of the intelligentsia, business community and more and for months it was Vision 2010. I was privileged to know the entire bazaar that followed both the inauguration of the group and the submission of their report, the gliterazzi and the resources that went with it, 248 of them, the wise, the very wise and the not too wise, after 10 months, an elaborate document, and 2010 came Abacha himself was long gone and the only thing we remember is that periodically we get money from his savings account.

The Millennium Development Goals terminated in 2015, and we did not get near. I remember speaking with one of those men in power then and I asked him if he knew that for Nigeria to be amongst the 20 developed nations in the year 2020, it only needed to pursue the then MDG positively and with both commitment and political will. His answer then was a smile, a smile that made me wonder, are we a people of limited patience or that we have patience in large dozes that we swallow everything.

It's comically how even amongst those that are supposed to know, or question the establishment; everybody is part of the bandwagon effect. Presidents come and go, one called it seven point agenda, then Governors copied, in Plateau, it was a ten point agenda, Delta three, and each state to its number during that era, now we are in the next level.

Malaysia has become an over quoted example, but there is India with almost the same peculiarities as us. Then small Singapore, also places like Cyprus. Here in the Continent, what can we truthfully say of Egypt, Tunisia, or South Africa, then Ghana, or how do we argue the rapid growth after years of war in Angola. Places where visions and dreams are pursued and either realized or in the process of being realized.

We have tried SAP, NAPEP, PAP, NEEDS, SEEDS, 20:20:20, SDG, and more will come, but neither has been the vehicle to a home grown strategy to poverty alleviation or the provision of the basics of life for Nigerians.. None of these dreams have created a Nigeria for Nigerians that we are grateful to belong to.

2020 is by the corner we are yet to get anywhere in poverty reduction, education and healthcare, manufacturing capacity utilization is below par, several sectors of the economy is in a free fall or have collapsed. The vast majority of the APC reforms that were hailed are being re-reformed or thrown out the door.

A lot has been happening, so fast, the pace so furious that some are even going unnoticed and that is the spirit. Fortunately or otherwise most of the events have glaring effects on the lives of millions of Nigerians but quite a number of us really care. It is in this light that I lend my voice to what I call the stark reality of the circumstances we find ourselves.

Let me conclude with these facts, in paraphrased words of the erudite last Maitama Sule, morns and values are not there, honesty does not pay, the institution of family has broken down, respect for constituted authority is not there, sympathy and symptoms for and of revolt lies in the horizon, there is meaninglessness in philosophy, insecurity in polity, chaos in politics, immorality in society, corruption in economy, frustration in art, and lack of creativity in literature. We cannot go into 2020 this way.

We can only stop the requiem...if we produce leaders, leaders that are true, with most qualities of leadership, leaders by example, leaders who will be acceptable by all and sundry irrespective of tribe and religion, leaders like a herdsmen and shepherds and farmers, who would sacrifice their lives, health and comfort for their cattle, livestock and crops, to serve and not be served, to give and not to take, leadership with philosophy to tackle political, economic and social problems, leaders who will share responsibilities, leaders with an understanding of our problems with intent to solve...

The fact remains that we are masters of our fate, captains of our soul; the dreams, the visions whether 2020, 2050, 2070, as long as the ordinary Nigerian is not the focal point will almost never work. The dream for a better, strong and virile nation lies in our hands. We need to start to recite the national anthem in practice, and that is if we have a nation. We need to start tasking our leaders, those that we have given public trust need to be held accountable or else Almighty Allah help us, as the journey is far and we have hardly began—Only time will tell