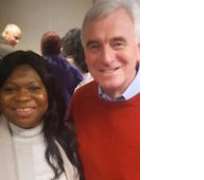 British Igbo born Chika Amadi Suspended by the Labour Party two years ago stood against Labour Shadow Councillor in Thursday General Election. Chika Amadi who served as an elected Councillor for four years at the Harrow Council is known as children and young people Advocate criticised a gay parade where gay men walked naked in front of a child. Chika who is also a Pastor and Legal Adviser believe ms that you must take your dream to the highest point even if you lose. She also believes that standing for what you believe in is not about winning or losing. “I Challenged UK Shadow Chancellor, John McDonnell for his parliamentary seat last night because the Labour Party has lost the plot and failed to tackle Antisemitism and its mob rule. The Labour suffered its worst election defeat for decades under Jeremy Corbyn and John McDonnell, the Shadow Chancillor. Chika who stood as a Christian Peoples Alliance Party (CPA) says, “I am a Local resident in the Hayes and HARLINGTON area, a former Councillor, a mother, a wife, a Pastor/Charity Worker, an Author, Immigration Legal Adviser with LLB degree from Middlesex University. I served as a Councillor representing Edgware Ward at the Harrow Council from May 2014 to May 2018 where I campaigned for health equality and I stood up for families, single parents, young people and children. I fought for Brexit. Since 2004 I have been organising conferences and seminars for teenagers and to empower women. Locally, I have lived in West Drayton since 2015 and have been interested in and standing up for things that are important to our local community.

I am a definition of diversity which is one of the striking characteristics of our constituency. I am approachable and a strong advocate for things I believe in. I want to continue fighting for our families and community as I did in Harrow. The time for town hall representation is over. I ask mothers, fathers and all residents to vote for me to be a strong voice for us all at the Parliament.

I believe that the established parties and politicians have broken our politics and lost touch with their constituents and no longer represent the will of the people.

Hayes and HARLINGTON needs a new hand to be their voice and I believe I can do a better job than the current representative.

Overwhelming majority of Hayes and HARLINGTON constituents voted Brexit but their representative thinks otherwise. He needs to go. Vote for me as your MP on the 12th of December. Thank you.

CPA policies:
1. Honour Democracy
We need to honour the will of the people and get Brexit done. We will offer Brexit referendum only after five years as this will give us time to gauge the state of affairs. This will unite the nation. 2. SUPPORT MARRIAGE AND THE FAMILY
The CPA will support marriage and the family with a £12,000 grant to first-time married couples and £6,000 upon the birth of their first child, provided they attend the required number of training sessions in marriage preparation and childcare.

“Aside from the human cost, family breakdown has been estimated to cost the taxpayer £48 billion per year. No other party will address this issue’.”

The CPA’s marriage and first-child grant (costing £4 billion) and other key policies would be funded by the introduction of a turnover tax of five per cent, offset against corporation tax, which is intended to stop big multinational companies such as Facebook, Google and Starbucks sending their UK profits abroad in order to cut down their tax bill.

This would raise an estimated £32 billion.
3. PROTECT UNBORN CHILDREN
We stand on strong pro-life platform and we pledge to restore full legal protection to unborn children while diverting more than £200 million of taxpayers’ money spent each year on funding abortions here and abroad into supporting any mother in a crisis pregnancy situation.

It is painful to note that within election campaign period alone an average of 598 babies will lose their lives to abortion in the UK, with over nine million lives lost altogether as a result of the 1967 Abortion Act. This is a national tragedy — we have to have the courage to face this issue and look for compassionate alternatives.”

By introducing a Turnover Tax (of 5%), offset against Corporation Tax, we’d address the disadvantage faced by British businesses.

This would raise an estimated £32bn, which we’d use to halve commercial rates to revive our city centres (£11.5bn), pay for our family policies (£4bn) and restore the £12bn in Tory benefit cuts by properly funding Universal Credit. We would help everyone sleeping rough with a free night shelter, meal and the right support to get back into society.

5. Fight Crime
We will help people leaving prison, guaranteeing them good accommodation and help to get work and also help to break any addictions.

to around 10% compared with a national average of around 30% but which can be as high as 62%. The result is 1) There will be many fewer victims. 2) There will be fewer people in court and in prison. 3) Ex prisoners will be happier. It costs around £38,000* per year to keep someone in prison so this is a win win

My personal pledges :
“I am proud to be on #TeamChildren and pledge to protect every child’s right to survive and thrive if elected“

1) Stop discrimination against baby girls by supporting a law change to clarify that sex-selective abortion is illegal.

2) Bring UK law closer to the laws in the majority of EU member states by lowering the gestational time limit for abortion.

3) Support women in the workplace by backing policies designed to end pregnancy and maternity discrimination.

”If elected to the United Kingdom Parliament I Pledge…

To oppose the extremists who challenge Israel’s right to exist.

To support the right of people in the United Kingdom to enjoy Israeli culture and promote business, educational, religious and other connections with the Jewish State without fear of discrimination, boycotts, harassment and/or intimidation.

To support those who genuinely seek to promote and establish a permanent, just and comprehensive peace between Israel and its neighbours.

To celebrate the fact that Israel is a free society and parliamentary democracy that extends to all its citizens the right to practise their religion and have access to religious sites in Jerusalem.

To encourage HM Government to promote trade with Israel that will increase investment and jobs for people in both countries.“

On #SocialEnterpriseDay I’d like to give a big shout out to all the social enterprises in Hayes and HARLINGTON who are doing such outstanding work. Thank you!

Improving the lives of people with communication and swallowing needs

I am committed to being a champion for disabled children in Parliament if voted in.

“If elected, I pledge to use my position as a Member of Parliament to work cross-party to ensure that every looked after child receives five-star care, not one-star accommodation.”

"If elected, I will support the @SchoolMilkAll and their efforts to ensure that providing all nursery age and young school children with free and subsidised milk during the school day remains a priority for public policy in the UK."

When asked why she is in politics given that she is a Pastor, she responded,”Believers and good people have lived in apathy enough! I believe that we must end the ugly cycle of Believers praying and voting in people with complete opposite opinions who then make decisions on behalf of us all of us contrary to our conscience. I preached and encouraged people to stand for elections for years but people were too scared to be vilified or called names like a backslider or compromiser until the Lord told me to set the Pace.

Standing for election in 2014 and winning to become a councillor earned me some ridicule. I remember attending a program as one of the guest speakers and as my host introduced me as a Pastor and elected Councillor, there was a great hush and scorn on the faces of fellow believers in attendance. It was until I stood and reminded them of holy people like Daniel, Joseph, Deborah, Moses, Elijah etc that I got an ovation and slow acceptance.

I believe that time of praying then moaning, complaining and grumbling because unholy laws and rules are made and implemented is over. We can make a difference in every areas of life. There is no bar. In fact the best place to shine our light as Light and Salt of the earth is in the public places . Maybe a lot of us shy away from being parent governors in schools or serve in political places because it is not money grabbing or we lack accountability! I may be wrong! You can do politics in righteousness! I am glad today that the tide has turned. We now have several true believers standing for elections and serving in divers places

I lost today’s election but I hold my head high knowing that I stood for things that are important to our father in heaven and our wider society. Never ashamed. Rather I feel like a Soldier of Christ as in 2017, the Labour Party and their LGBT led mob called me names like my Master was called for calling them out for promoting, sexualising and corrupting of children! I still believe that I did the right thing. I cannot be silenced or accept to be bullied for standing for truth!

I am not into politics for personal gain or to make a name. I am in politics because the zeal of my Heavenly Father’s Kingdom has eaten me up. I have shared the gospel with people in power that I would otherwise never reached -MPs, Councillors, Mayors, leaders of Councils - brought and preached Jesus to the unchurched folks who had not even heard the Gospel all their lives. For the first time the Gospel was preached inside Harrow Council Chamber!

I have also had a share of my political pain having been suspended as a Labour Councillor but I have no regret whatsoever for standing up for children and young people against the LGBT agenda. We are the generation who do not give up. Never shy away from standing for raw truth. I never fancy political correctness. I never want to follow popular narratives but only the truth that never fades. Believers arise, be actively involved in your community but don’t be careless. For us to see righteousness established in our cities and communities we must carry the Gospel with one hand and service with another to light up our world. Let your Kingdom come oh Lord!

It is not yet over! Once a winner always a winner.