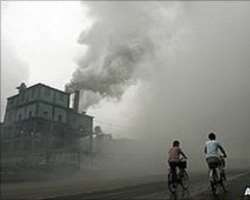 By Pallab Ghosh
Some 98% of climate scientists that publish research on the subject support the view that human activities are warming the planet, a study suggests.

It added there was little disagreement among the most experienced scientists.

But climate sceptics questioned the findings, saying that publication in scientific journals was not a fair test of expertise.

The findings have been published in the journal Proceedings of the National Academy of Sciences.

The study's authors said they found “immense” differences in both the expertise and scientific prominence of those who supported the “primary tenets” of latest assessments made by the Intergovernmental Panel on Climate Change (IPCC) and those who were sceptical of the IPCC's findings.

In general, they added, the researchers who were convinced of the human impact on climate change had published twice as many papers as their sceptical counterparts, and were cited in other people's research two to three times more often.

Lead author William Anderegg, from Stanford University in California, US, said the findings suggested that not all experts were equal in what they claimed.

“The researchers who are convinced (by the IPCC's assessment reports) have a lot more experience in climate research and have published a lot more papers in the scientific literature and are generally well respected in their field,” he said.

“And it also demonstrates the converse that those who are sceptical of the IPCC's claims, in general, know a lot less about the climate system.”

Mr Anderegg and his colleagues drew from a list of 908 researchers who had contributed to research used by the IPCC and have signed statements broadly in support of the UN body's assessments.

On the sceptical side, they chose 475 scientists from a list of 11 major sceptical declarations and open letters.

The researchers said they felt the need to carry out the survey because of the growing public perception that scientific opinion was divided on the issue following recent scandals, such as “climategate” at the UK's University of East Anglia and the use of non-peer reviewed literature in the IPCC findings.

'Broad-brush study'
Sceptical groups, however, argued that publication in scientific journals was not a fair test of expertise.

They said that those who choose which papers to publish favoured research that supported the IPCC's view, and suggested that the new study was tautologous.

Professor Hans von Storch, from the Meteorological Institute of the University of Hamburg, said: “You have to ask yourself – which are the the tenets of (the human induced climate change) outlined by the IPCC the '”convinced” groups of scientists agree with.

“There is a core of assertions, dealing with the effect of greenhouse gases on temperature and sea level, which enjoy general agreement,” Professor von Storch told BBC News.

“While others, for instance, related to the Himalaya glaciers, the changing tropical storms and their damages or the fate of Greenland, are heavy contested.

“It's typical of this broad-brush study to make such wide ranging claims similar to the infamous 'the debate is over'.”

Dr Sonja Boehmer-Christiansen, from the University of Hull, UK, added: “Who judges expertise and prominence? It looks to me that the authors belong to an IPCC supporting group that must count as believers and belong to the beneficiaries of the man-made warming scare.”