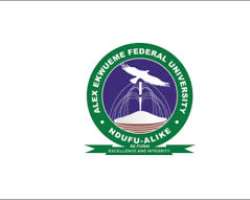 Alex Ekwueme Federal University Ndufu Alike Ikwo, Ebonyi State is set to graduate a total of 512 students in her 4th convocation slated for next week.

The Vice Chancellor, Alex Ekwueme Federal University, Prof. Chinedum Nwajiuba made this known in a pre - Convocation press conference held at the Senate Chambers of the University.

He stated that 20 will be graduating with first class with a young lady emerging as the overall best graduand for the year from the Department of Biochemistry, faculty of Sciences.

Still on the breakdown, the Vice Chancellor announced that a total of 205 made 2nd class upper,, 263 have 2nd class lower and 24 are coming out with a 3rd class.

He said that for the first time in the history of the University, they have people who would be awarded post graduate degrees and persons to be awarded honorary degrees.

According to him, one of honorary award is a posthumous honorary degree to the late Philip Effiong. whom he said has a very prominent place in Nigerian history, followed by another awardee, the former Speaker of Delta State House of Assembly, Hon. Victor Oche