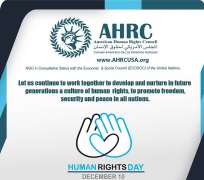 The American Human Rights Council (AHRC-USA) joins the world's community in recognizing and observing the International Human Rights day on December 10. Nations that are members of the UN are bound to respect human rights enshrined in the Charter and in the Declaration.

This year as we celebrate Human Rights Day with millions of people denied these basic rights enshrined in the Declaration. Everyone is entitled to these basic human rights. The issue of human rights is not a partisan or ideological issue and violations of human rights are to be condemned no matter the identity of the violator or the identity of the victim. The continued human suffering and its increase is a painful reminder to all nations that the state of human rights across the world in general is not good and requires renewed commitment to live up to the spirit and the letter of the Universal Declaration of Human Rights. All people are equal. Human rights are not selective nor its value determined by a person's race, color, faith or nationality.

On the Day of Human Rights, AHRC calls upon all nations, groups and individuals to fully respect the Declaration of Human Rights and to live by it. In this International Human Rights Day, let us continue to work together to develop and nurture in future generations a culture of human rights.

"International Human Rights day comes amidst a world torn by wars and conflicts where violations of people's basic human rights is on the rise," said Imad Hamad, AHRC Executive Director. "This increase in human rights violations at home and abroad continue to be met with double standards, political hypocrisy and selective definitions to justify such violations," added Hamad. "All nations across the globe must respect and honor their own declared commitment to respect and protect human rights in their perspective countries, today is a call to action," concluded Hamad.