We Warned Sowore, Falana And Others Over Buhari Because "Tyrants have NO friends" - Chief Femi Fani-Kayode 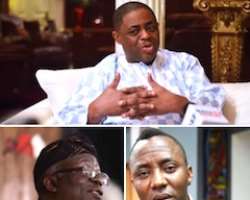 The former minister of Aviation, Chief Femi Fani-Kayode has stated that they warned Omoyele Sowore, Femi Falana and others over President Buhari.

In a post on his social media page, Chief Femi Fani-Kayode revealed that rather for the duo to heed to their advice, they chose to insult them and went ahead to install Buhari into power.

”We warned @YeleSowore, Femi Falana and others that Buhari was a tyrant in 2015.They insulted us & put him in power.The tiger they rode has now turned on them.Why do our people always assume that when others are persecuted that it will never come to them.Tyrants have NO friends!”, he stated on Twitter.