Haiti Don't Want A Government Established By The U.S. But By Haitians 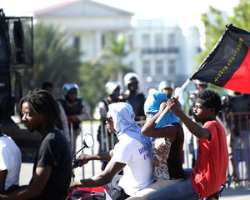 Let's not forget how our Ancestors fought for our freedom years ago in order to get Haiti and Haitians/Africans the respect they deserve. Unfortunately, the current Haitian Government has ruined 'The Haitian Revolution' purpose and goals. Haiti used to be powerful and proud but since when the United States keep adding their own Presidents and Prime Ministers in power, Haiti has lost its value in the eyes of all nations. Years ago, before and after the Haitian Revolution, the leaders in power were selected by the Haitian population, but that system was changed. Let's not forget that Haitians are the first black nation that won a successful anti-slavery and anti-colonial insurrection.

During the year 2018, the U.S. Citizens and all the U.S. media were not ashamed to call Haiti a 'shithole country' after all, even when Haiti is part of America and the United Nations. Honestly, the U.S. Citizens and the U.S. media wouldn't dare to call Haiti names if the Haitian Revolution leaders like Toussaint Louverture, Jean-Jacques Dessalines, and the others were still alive because they would declare war immediately for the disrespect. Sadly, the Haitian population was surprised to see how the current Haitian Government was quiet when the U.S. called Haiti a 'shithole country'. Let's not forget that Haitians are the first black nation that won a successful anti-slavery and anti-colonial insurrection. Because of that, the people in Haiti believes that the U.S. along with some other countries and the puppets that the U.S. put in power are responsible for all the misery and poverty that's going on in Haiti. Let's not forget that the countries in America are well-developed and rich in industries but how come Haiti never prosper, even when Haiti is part of America and the United Nations.

"Haitians are being punished for being the first black nation that helped and Taught many countries how to get their freedom. Through the years, Haiti is being punished for the liberation of many slaves around the world. Unfortunately, that's why they don't want Haiti to prosper.", said Werley Nortreus.

The political actors and the opposition leaders in Haiti believe that the current Haitian Government led by President 'Jovenel Moise' and his PHTK friends are against Haiti. From 2017 until today, the U.S. Government sent so many Diplomats like Michele Sison, Kelly Craft, David Hale, and others to sit down with the current President 'Jovenel Moise' and other political actors in order to have a new Government, but all the leaders rejected the meeting, except 'Jovenel Moise' and PHTK. From 2016 until today, thousands of people in Haiti have taken the streets to demand a new government led by the youth because the majority of Presidents and Prime Ministers who used to be in power failed them. All the protests and chaos in Haiti mean that the population in Haiti doesn't want a new Government established by the U.S. or anything else but by them.

"It looks like the Haitian population wants to become one and work with Venezuela, Africa, and Russia. Not the U.S. at all.", said Jean Lewis.