Will The Eyadema Dynasty End in Togo? 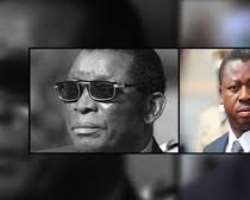 Togo, a tiny Francophone West African Country obtained her independence from France in 1960. One of her staunch nationalists was Sylvanus Olympio who fought the French tirelessly until the latter was forced to give Sovereignty to the small republic.

On January 13, 1963, less than three years in office, Olympio was assassinated in a bloody coup d’etat led by the then twenty-seven year old Gnassingbe Eyadema who proudly told the Togolese that he was the one that pulled the trigger which sent the President to meet his ancestors.

Olympio’s arch rival, Nicolas Grunitzky succeeded him before the power drunk Eyadema eased him out in a bloodless coup in 1967.

Eyadema who was formerly known with the first name of Etienne ruled the nation with an iron fist for thirty-eight years. He allowed some semblance of ‘democracy’ when he permitted a multi party system but it was all a ruse as he ensured that all efforts to unseat him ended in a fiasco. Many of his opponents were killed, disappeared mysteriously or were forced to go into exile for the fear of their precious lives. Eyadema ensured that the members of his Kabye tribe were given top positions in all sectors of the economy and polity which ensured his ad infinitum stay in office. Gilchrist Olympio, the son of the first President tried unsuccessfully to dislodge him through the ballot box but the corrupt Eyadema ensured his efforts were in vain. In exasperation, he was forced to go on exile several times as he escaped death by the whiskers while resident in Togo.

In 2005, the dictator who had been in power for thirty-eight years answered the inevitable call. His son, Faure an American educated man promptly stepped into the large shoes left behind by his tyrant father. The then President of Nigeria, Chief Olusegun Obasanjo didn’t support the latter’s actions and asked him to step down. Faure stepped down soon after but an ‘election’ was held which he won by a large margin. He has been in power since then and has used his clout and the goodwill gathered by his dad amongst his tribesmen to alter the constitution which has now made him wants to seek re-election for a fourth term in February 2020.

According to AFP: “In early May, the Togolese deputies voted a constitutional amendment allowing Gnassingbe to run again in 2020 and 2025, but also to benefit from immunity for life “for acts done during presidential terms”.

The alteration of the constitution is a surreptitious ploy by the autocrat to be in office for life just like his late dad. Why on earth would he still want to run again in 2025? What have the Eyadema’s achieved in their combined fifty-two years in power? The people have been unduly impoverished and have been weeping and gnashing their teeth since 1967.

There have been benevolent dictatorships like the ones in Singapore, Malaysia and China which saw their economies leapfrog from third world to first world nations in less than half a century. Much as I am opposed to dictatorships, the rule of the Eyadema’s would have made a whole lot of sense if the people were better for it. Their combined long rule would have been the subject matter of study by historians if their country experienced development in all its ramifications.

Many opposition leaders have voiced their opposition to his rule most notably Farida Nabourema who has risked her life to ensure that true democracy returns back to the former French colony.

It is tragic that Faure couldn’t let the rare privilege of his highly prized American education to imbibe the values of the best form of government in the globe. This is the tragedy of most African leaders who frequently go abroad but cannot transfer the good things they see there back home. Why is this continent so cursed with backward thinking leaders? For how long will the majority of her citizens groan in agony because of absolutely corrupt leadership?

The Togolese shouldn’t despair as this current age of the social media has greatly devolved power to the ordinary citizens. Let us take a critical look at the Arab Spring which saw the ordinary citizens of some countries in the Maghreb take on cruel and evil dictatorships and force the sit-tight rulers out of office and power. I am an advocate of peaceful means to change governments as the use of force is counter productive. The protests should continue as they are necessary to end their corrupt reign. Another enemy the protesters cum democrats should contend with is France who still plays the role of a mother hen for most of the Francophone countries in Africa. The erstwhile colonial master who used the policy of assimilation during the gory days of colonial rule to have a strangle hold on their former colonies support dictatorships that pander to the advancement of their economic interests. Trust me, the Eyadema’s wouldn’t have been in power that long without the support of France.

The power of incumbency is losing its grip in Africa. The protesters should take a cue from Nigeria, Ghana and The Gambia who got rid of their incumbent Presidents through a sturdy alliance among the opposition parties. The Togolese opposition should be wary of the divide and conquer strategy of Eyadema by harmonizing all groups into one formidable force that can give Togo the much needed saner political leadership. The election is barely two months away and this is the time to regroup into a single unit.

We hope to clink the glasses on February 22nd if the opposition can successfully end the ignominious rule of Faure which will herald the dawn of a new era in the largely impoverished nation.