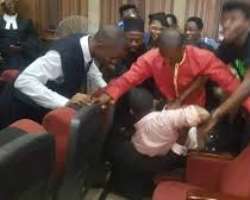 On or before is bad leadership, following suit is hate speech. What is hate speech when the purpose was and is to bury watch-dogism, journalism, civic consciousness and idealism. Nigerians have already taken sides. The good eyes would not debate that those who don't want the restricting speech bill are massive and are in charge already. Nigerians should deliver themselves further from this temptation, we, Nigerians should not harbour discount on our freedom of expression - expressions and speech. At every point in time, Nigerians jaw out expressions for noble course, is it the demand for justice and good governance that would be appellated wrong ? No. Hate speech is against emancipation ; emancipation is seeking greener pasture for ones land. Hate speech is against all manner of resistance and protest ; protest is converging ways of attending to issues. Hate speech is the antonym for good governance. However, there is nothing more to describe unity, faith, peace and progress in Nigeria than resisting hate speech, even as a bill, for everyone's conduciveness. Closely, bad leaders or coarse leadership refers to all manners of investing hands who have ultimately delayed justice everywhere in Nigeria. Wherever justice is bargained as a result of presiding-in-power is a wrong place in the breathe of time. Unfortunately, courts are wrong places too. Nigeria under the watch of Mohammed Buhari on the maltreatment of Omoyele Sowore was and is wrong. The Presidency cannot be disjointed from the discriminatory roles played against Sowore in the history of today and that which is to come. The reason is precise, the presidency is too full of self.

National debris including all negative and inhumane vices fertilized by the present hardened national administrators have disposed the wellbeing of Nigerians since it democratic sojourn, picking the need on citizens to continually resist. Yele Sowore picked to resist, a portion of Nigerians also picked in his name. Every Nigerian who has found this waywardness did. From Sowore's case, what is wrong in commissioning a protest against the disloyalty of democracy ?

Attempts to rearrest Sowore has been successful. The essence is to criminalize the standard of the constitution. If eventually we have failed to understand all, it is steer and unclean that the rigidity in this system is unrighteousness.

Nigerians is growing swollen in this last bridge of the incumbent president, the goat-attitude of rule of law and the gorilla-supremacy of justice chart the remaining long way this leadership would truck Nigeria. Nigerians no matter what, is justified for seeking good governance. It is still not too much to call for a revolution.

Aduwo Ayodele is a Nigerian Journalist. He can be reached via [email protected]