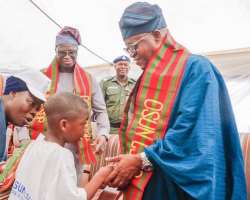 The governor was at the school on Tuesday where he commissioned the projects to mark the 2019 World's Disability Day.

The projects commissioned by the governor include the Braille Press center for the blind, the girls' hostel, the fence of the school and six tricycle to ease transportation of the physically challenged persons.

The facilities were put in place with the support of the World Bank assisted Osun Community and Social Development Projects (Osun-CSDP).

Speaking at the event, Governor Oyetola lauded Osun-CSDP for the feat and assured the persons with disabilities in the state that they would not be marginalized by his administration.

Addressing the gathering, the General Manager of Osun-CSDP, Mrs Abokede Aderonke Funmi rejoiced with people living with disabilities on the occasion of World's Disability Day and charged them not to allow their condition to stop them from achieving their potential in life.

She noted that the state government in conjunction with the World Bank through Osun-CSDP committed N109,317,855 for 48 Socially Inclusive Micro-Projects including the four inaugurated in the school.

She said "These microprojects are contributing and will continue to contribute to the achievement of the state's development plan."

"The state government under the able leadership of our amiable Governor, Mr Gboyega Oyetola is willing and committed to doing more for the inclusion of the persons with disabilities in our dear state", Abokede said.