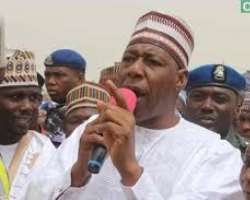 Borno State Government has awarded a contract for the construction of first Fly over Bridge in the Northeast to the Eighteen Engineering Company ( EEC) at the cost of N4, 287 billion to be constructed in Customs area of Maiduguri city.

Signing the contract on behalf of the Borno State Government in his office at the Musa Usman Secretariat Tuesday, the State Commissioner of Works, Architet Yerrima Saleh said, " today we are going to witness a historic ceremony of the signing and awarding of contract for the Construction of the fist Flyover bridge in the Northeast at Customs area in Maiduguri at the cost of N4, 289 billion to the EEC to be completed in 18 months starting from December 2019.".

" The construction of the Flyover is as a result of His Excellency's concern for the difficulty in traffic jarm in Post office and Customs areas,.

"It could be recalled that immediately after his swaerning as the governor, he took a visit to Post Office area and promised to construct a Fly over. Today in fulfilment of that promise we are witnessing this occasion ", h Kida added.

"And agreed to execute the contract in18 months without additional cost according to the design at the stipulated time and quality", Yeruma added.

Speaking at the occasion, the Borno state Commissioner for Finance Alhaji Adamu Lawan said "I congratulate the EEC for wining this contract, the state government is willing to pay as at when due, we are not going to default in payment.

" With the construction of flyover, Maudugri is going to migrate from rural city to Modern city", Lawan said.

In his remarks, the Birno State Commissioner for Information, Alhaji Babakura Abba Jatau urged Maiduguri residents to be patience during the period of the construction, as the project will put Maiduguri in some temporary difficulties but after the 18 months they will smile because it will ease traffic in the area.

Earlier, the Permanent Secretary of the Ministry of works, Engr Ibrahim Njidda said ," the signing and awarding of the contract for the construction of Fly over in Customs area is a great landmark in the history of Borno state and the Northeast in general as it is the first ever flyover in the region".

Resoonding, on behalf of the EEC company, the Managing Director, Mr. Qin Weiguo thanked the Borno State Government for considering them worthy of the contract saying ", I assure you we are going to do our best to construct a befitting Flyover in custom area within the stipulated time and quality.

"We will work hand in hand with the government to ensure successful completion of the flyover ", Win said.