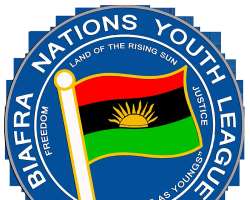 The Biafra Nations Youth League, BNYL, has warned the Federal Government over threat to arrest the Leader of Indigenous People of Biafra, IPOB, Mr Nnamdi Kanu on his return to Nigeria for his mother's burial, National Leader of BNYL, Princewill Chimezie Richard have declared. He said the action will lead to unrest in the South-east. The BNYL Leader in a press briefing in Owerri, Imo State said the Biafran agitators especially his group commands respect as well as loyalists in the Militant zone of Niger Delta especially the Bakassi Peninsula where he has been arrested twice by Soldiers of OPERATION DELTA SAFE, "To us, this threat is not needed at this point in time because it can lead to crises if not well managed.

He reminded the Government of the crises that emanated from Kanu's previous arrest, "the massive protests which later turned bloody, the Militancy in the Niger Delta and Bakassi Peninsula.

Suffix it to say that the Biafran crisis contributed 80% of the conflict in the coastal line. Because we command respect amongst some of these Militant boys especially in Bakassi, and they are ready anytime, anyday to swing into action.

I have also gone in for it, during my arrest in Ikang-Cameroon boarder area of Bakassi, during the Militancy (Bakassi Strike Force), in November 2016"

He thus warned that the government will regret any attempt to throw the east into tension.