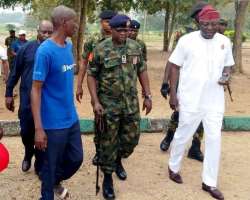 The Director General of the National Youth Service Corps, Brig. Gen. Shuiabu Ibrahim today lauded the NYSC officials in Osun State for their efficiency and urged the new corps members to mix among themselves during their orientation course.

During his visit to the NYSC permanent orientation camp at Ede, Osun State, the DG charged corps members deployed to Osun State to integrate fully with one another as this is one of the major objectives of the scheme so as to ensure national unity.

He was in Osun as part of his inspection tour of the ongoing 2019 Batch C stream one orientation course.

The Director General inspected the ongoing registration process, the kitchen, camp clinic and the medical laboratory, charged the new corps members to make friends with members from other geopolitical zones in order to fully integrate and learn about the many similarities that binds the nation as one.

Speaking further, Brig. Gen. Ibrahim warned them against embarking on frivolous journeys and risky adventures during the service year.

According to him, " try as much as possible to settle down in the state of your deployment, make friends with people from other states and geopolitical zones and avoid travelling without permission."

"The instances of many of our corps members that we have lost were as a result of road accidents. Therefore, do not embark on unnecessary journeys during your service year".

"We want you alive and healthy. Cooperate with the camp authority so you can have a fruitful and memorable camping experience " he added.

The Director General also commended the strides of the state coordinator, Mr Ayodele Adewale Adegoke since assuming duty as the 12th Chief Executive of the State.

He expressed delight at the excellent maintenance culture exhibited by the State Coordinator and his team.

He equally commended the registration officers for a job well done and charged them to watch out for prospective corps members with fake certificates, as the fight against fake certification and fraudulent mobilisation is still on.