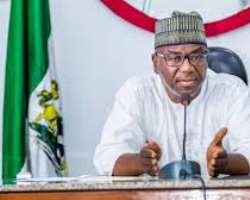 Things are beginning to look up for Kwara state. The state is beginning to live up to its alias of a State of Harmony and governance is assuming its real meaning. Yes, the state is lucky not to have another stooge to hold down the cow for a few to milk and the word of one man is no longer law. What is more, the till is no longer plundered to drive the false lifestyle of an imperious few and their hangers-on.

From all indications, the electorate in Kwara state did not make a wrong choice last March when they dismantled the anger-inducing political arrangement of the past. With only pain and anguish to show for their loyalty over the years, the least the people of Kwara state expect is quality governance, a commodity denied the people for so long. The story of Kwara state has never been this assuring.

For close to two decades, the people sneered, murmured and insinuated and watched helplessly as opportunities were frittered and promises of redemption, willingly made by their smooth-tongued oppressors went unfulfilled. Indeed, ‘’O to gee!’’ was a gamble that paid off.

Credit for the gradual return of commonsense must go to His Excellency, Governor Abdulrahman Abdulrazaq.

Since the Governor Abdulrazaq assumed office last June, the people of Kwara state have begun to see a truly fulfilled, contented and incorruptible man at the helm of affairs. They are beginning to believe a man who said he did not aspire to govern in order to steal to build new houses or to buy customised cars. Unlike the recent past when freeloaders feasted while the people grumbled helplessly, the people are getting used to a governor who does not operate bank accounts of the state as an inheritance.

Imagine this! Isn’t it amazing that Governor Abdulrazaq, now more than a hundred days in office, has not submitted bank accounts to the office of the accountant general of the state for any remittances? It is wrong to assume that Governor Abdulrazaq is spending his personal money to return smile to the face of the people. Unfolding, before our very eyes, is a brand new socio-political order that frowns at the free reign of freeloaders.

It is heart-warming that unpaid salary arrears and pensions inherited from the rowdy political crowd of the past are now receiving express attention of the new administration. Isn’t it interesting that civil servants no longer receive now a fraction of their monthly salaries as was the case in the recent past? We may never know the exact amount past governors and their lackeys wasted on chattered flights but, recently, not a few Nigerians reacted positively at the sight of a governor, with a backpack strapped across his shoulder, on a queue to board a commercial flight.

In the years between 2003 and 2019, governors and their fawning cronies considered it demeaning to board commercial flights. Tell me! Isn’t it a huge surprise that Kwara state generated millions in Naira within the first hundred days of the new administration? It is not as if revenue was not generated internally during the locust years, problem was that freeloaders serially stole every generated revenues to the last Kobo and plundered every inheritance of the state that caught their fancy.

Few things will please the people of Kwara state than to see retrieval of all state property illegally converted into the private fiefdom of a rapacious few. Within the first 100 days of the Abdulrazaq administration, taps started running in the state capital and many are questioning why, in the first place, the taps went dry over the last sixteen years! Realising it did not require rocket science to cause taps to run, the governor has directed that waterworks across the state become functional within the first 100 days of the administration.

Backlog of unpaid workers’ salaries and pensions are being cleared. Life has returned to state tertiary institutions after the government offset a huge chunk of unpaid workers’ salaries! The Abdulrazaq administration has done well by promising not to embark on attention-seeking projects. Rather, the governor has directed runaway contractors to complete abandoned projects. Decaying infrastructure that litter the state are getting the attention of the new administration.

At the heart of the problem here are township roads, schools and health facilities in the state which are now being rehabilitated and upgraded. In a radical departure from the past, Governor Abdulrazaq last June directed that workers who were hurriedly employed on the eve of the departure of the last administration be absorbed into the state civil service! Former governor, Bukola Saraki, vindictively dismissed similar workers in 2003.

Yesterday, the people of Kwara state had good cause to be angry with their past leaders; today, they also have good cause to be anticipative. Still, there are people who have been programmed to see Governor Abdulrazaq in the flimflamming image of their heroes. But, while his starry-eyed critics yammer, the governor is restoring confidence to a people who, before last March, had thrown up their arms in utter despair.

Now, Kwara state is gradually returning to its natural state of harmony and the collective dream of a rejuvenated state, devoid of the manipulative tendencies of a few over-pampered individuals, is becoming realistic. Kwara must get it right but, first, the people must rise above petty political squabbles and rally round the new and unencumbered Sheriff in town. Before our very eyes, harmony is returning, gradually but surefootedly, to the State of Harmony.

Time to blow the trumpet and beat the drum! After all, ‘O to gee’ (Enough is enough!) is paying off.