Mastermind Of Appeal Judge Kidnap In Benin Arrested By DSS 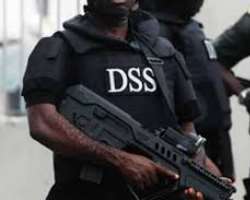 The Department of State Services (DSS) has arrested a male suspect, Stanley Onoriode Ekemaye, who allegedly masterminded the abduction of Justice Chioma Nwosu-Iheme of the Court of Appeal, Benin division.

The Justice, who has since regained her freedom, was abducted on October 30, 2019 in Benin City. Her police orderly was assassinated by her abductors during the attack.

Ekemaye, who has been described as a “notorious kidnapper,” was arrested by DSS in the early hours of Tuesday at Okwuzi Egbema in Ogba/Egbema/Ndoni local government area of Rivers State.

Ekemaye, the secret police claimed had been coordinating robberies and kidnappings around the Delta, Edo and Rivers axis for years.