Respect the Office of the Governor - Coalition Warns Enugu Elders 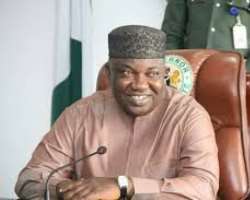 Our attention has been drawn to the disrespectful statement made against the Governor of Enugu State, Rt. Hon., Ifeanyi Ugwuanyi by the 'supposed' elders of Egwu-Achi Autonomous Community in Oji-River Local Government Area of Enugu State over Igweship matter in the area.

In a statement released to newsmen in Abuja by the National Coordinator of the coalition, Dr. Edwin Obune, the group said while it is not interested in meddling in the chieftaincy matters of the community, it however take exception in the unwarranted manner in which the elders of the community casted aspersions against the governor as well as the office of the governor in the Daily Trust Newspaper without observing decorum and respect for that great office.

The group however noted that matters related to chieftaincy affairs is something the Ministry of Chieftaincy Matters could handle without necessarily involving the governor who is the Chief Executive of the entire state.

In similar vein, the group also noted that the community should view the intervention of the governor as a privilege and not as an opportunity to threaten him with violence in any part of the state or blackmail or portray him as one who disregards court order even when the veracity of their claim is not yet established.

Government as an institution has a well established or organised channel for exchanging correspondences and not through the media as the 'supposed' elders of Egwu-Achi Community have made the world to believe.

Haven failed to abide by several peace efforts mediated by the governor, the Egwu-Achi elders been one community out of the over 450 Autonomous Communities in the state should stop behaving as if they are above the law or running a state upon a state in Enugu.

Therefore, before thinking of rushing to the media again, we advise the 'supposed elders' to explore the internal communication mechanisms established by the state government instead of thinking and believing they can force the government to go against the laws of the state by issuing threats in the media or acting in certain ways.