Bayelsa Decides: There Was No Elections In Ekeremor - Democracy Watch Nigeria 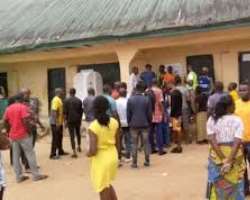 A coalition of civil society organisations under the auspices of Democracy Watch Nigeria has called on INEC to reject the results from areas where elections did not hold.

The coalition, representing various groups accredited by INEC as Observers for the Bayelsa election, made this call on Thursday, 21st November, 2019 at a press briefing in Abuja.

The election monitoring group said voting did not take place in Nembe and Ekeremor Local Government areas, including some units in Yenagoa, where violence marred the process.

Excerpt is the full text of the press briefing

Heads of various organizations Accredited by the Independent National Electoral Commission (INEC) to observe the 16th November 2019 Governorship election here present, Gentlemen of the Press, Ladies and Gentlemen, Good morning and welcome to this press briefing.

In any democratic state, the protection of rights of citizens remains the primary function of Government. In other words, the fundamental Human Rights as guaranteed by the 1999 constitution of the Federal Republic of Nigeria as Amended provides for the Freedom of Association of every citizen. Anything short of this tantamount to a violation of the rights of citizens. What we saw in some LGAs in Bayelsa state is an aberration to this constitutional provision and grossly not in consonance with the provision of the Electoral Act 2010 as Amended. We observed that elections did not hold in some parts of Bayelsa State as it was grossly disrupted by violence, intimidation and ballot box snatching. In some instances, there were complete absence of voting materials and Ad hoc staff.

On Wednesday the 13th of November, 2019, a political party was having a campaign in Nembe LGA. Some blood thirsty gun men came to the venue and opened fire without any provocation whatsoever, killing scores of law abiding Nigerians. Same gunmen prevented election from holding in Nembe LGA. Till the time of this briefing, there has been no arrests, no prosecution thus increasing the impunity associated with committing such heinous crime as perpetrators are largely known and seen moving freely in such communities.

Nembe LGA was the worst hit in pre election and election related violence. Elections did not hold in Nembe LGA.

Some parts of Southern Ijaw were completely disrupted with violence. There was no elections in Ekeremor.

We observed that in Ogbia LGA, results was largely written in the comfort of some people’s homes.

Several communities in Bayelsa state were sacked not due to flood or any natural disaster, but as a result of their affiliation to a particular political party. In Bayelsa state ,we observed that territories were already apportioned and shared as certain areas were controlled by some militant groups. Even the military in this instance would tell you not to get close to certain communities. Communities that were sacked due to violence, including their various traditional rulers and kings who were living mostly in Yanegoa town as IDPs could not exercise their franchise.

There is a disconnect of the security architecture of the 2019 Governorship election in Bayelsa state and the reality on ground as observed by our coalition as violent crime, conspiracy to sabotage the nation state of Nigeria was displayed without recourse to laws of the Federal Republic of Nigeria nor the Fundamental Human Rights of citizens.

Inspite of this reoccurring decimal of violent crimes in parts of the state, the police as the lead agency for internal security has not provided the armed personnel within few perimeters from the polling units and points as propose. This has further increased the snatching of ballot boxes across the state.

The posting of police personnel for the 2019 General election had the mobile phone numbers of these officers and men attached to various polling units and polling points for easy access and communication. We observed that this was completely absent in the Bayelsa State Governorship election.

Again, we observed with dismay the refusal and sabotage of the members of National Union of Road Transport Workers (NURTW) who collectively refused to convey INEC sensitive materials to the jetty where the military and their several Gun-Boats were already waiting for conveyance.

Some highly placed individuals were seen moving with several escorts of military and police personnel when on normal circumstance, the securities of such persons ought to have been withdrawn until after the duration of the election.

In furtherance with the enabling laws as Non-Governmental and Non-Partisan organizations, it is our collective determination to ensure that politicians who sponsor, fund, aide or abate violence would be made to face the full wrath of the law. We would report perpetrators of such crimes to various embassies of the world so that travel bans would be issued on them and their families. The embassies are already considering that.

Finally, in line with ensuring a transparent, free, fair and credible elections, we call on the Independent National Electoral Commission (INEC) to probe results that were accepted, collated and announced even when elections never held in such areas. The acceptance of results emanating from areas where snatching of ballot boxes and violent crimes occurred should be probed by the commission. It is evident that election processes that is not in consistence with the provisions of the Electoral Act 2010 As Amended dominated parts of Bayelsa State Governorship election of 16th November, 2019.

Consequently, INEC should not just stop at taking measures to build electorates confidence in our electoral system, but should be seen to be doing so while the commission remains apolitical.

Thank you.
Signed:
(1) S. B Bafunsho
Organization of Justice for Equity Sustenance

(5) Dr. Nwambu Gabriel,
For the coalition