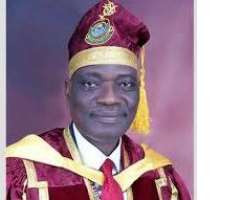 How time flies! Just like the squeeze of a lemon; it’s been two years since Prof. Oluwatoyin Ogundipe took over as the 12th vice – chancellor of ‘University of First choice and Nations Pride’; The University of Lagos, Akoka Yaba. The smoothness of transition from Prof. Rahman Bello to Prof. Toyin Ogundipe made one to believe as if the management of the university, had remained the same. It has been different styles both in administration and management of the university. The university under a new Council headed by Dr Olawale Babalakin SAN came in too with its own supervisory style. Hence this caption of different strokes, with increased development at the university of Lagos in the past two years. Even the ‘ALUTA GROUP’ better known as the Alumni Association has been under a new leadership within the same period. Hither-to, it was a group led by Olorogun (Dr) Sonny F. Kuku OFR of the famous Eko Hospital, however now, Dr John Momoh OON. The chief executive of Channels Television is in the saddle. The three – legged style group, i.e Management, Council and the Alumni has adopted different styles in moving the university forward. It has been a transformative leadership style, run in the best norms of ethical behavior towards achieving same goal. Keeping to the traditional of honesty and integrity in the spirit of “IN DEED AND IN TRUTH”.

This style of management can be described as a medium of collective decision making where singular achievement of individuals or group would be difficult to pin-point. However, results and achievement would be accorded to the head of each of these core units in the system. For instance, this writer believes that Council has conducted it-self in the best ethical standards of behavior and in the interest of the university. Also, it would expect that decision-making process would be free from external influence from the body that has appointed it to serve as the “supervisor” of the university. It must not be an issue of ‘he that calls’ the piper that will dictate the tune’. It is also the duty of the Governing Council to ensure that the student’s union and the Alumni associations operates within a fair, democratic, accountable norms. This writer believes that the council, in the past two years has been able to keep management in focus towards achieving its objective of becoming a topclass institution for pursuit of excellence in knowledge, character and service to humanity. Its eagles’ eyes are performing its duties.

In order to keep within the character of “In Deed and in Truth” the vicechancellor, Prof. Toyin Ogundipe noted in April 2019 that the university had taken great strides in enhancing teaching, research and providing community service. He noted that progress made so far is and above what he met on ground and this has been made possible by the unwavering support of the university Governing Council, the university community and other stakeholders. He noted then, that, the various faculties have worked tirelessly to attract more grants to enhance research and teaching. For example, over N1billion, as at the last count is within the purse of the university. Lately too, in his term report to Council, Prof. Ogundipe noted that, the ultimate agenda of the University under his watch is to become one of the global best. This is aimed at getting the University to be as one of the best four in Africa and indeed the best in Nigeria by 2022. Even as uniRank earlier this year, placed University of Lagos as 1st in Nigeria and 12th in Africa, this writer takes this achievement as work in progress for the university and one is optimistic that the next ranking will see the university go further up as necessary mechanism are being put in place for this purpose. The internally generated revenue, better know as IGR, is steadily growing.

It is noted too that in addition to research grants attracted by the faculty members, the University through its Central Research Committee funded over thirty-three (33) research proposals from members of staff with over N84m. this is a great achievement in deed.

The University of Lagos Business School within the year commenced operation with its first set of students running the Executive MBA course accredited by the NUC. The University’s facilities were found to be adequate and of international standard. It is believed that the Business School would also run short executive courses with highly experienced industry personnel as resources persons to join the internal facilitators. Unilag in this regard is also reported to be collaborating with other Institutes to run the Executive MBA programme.

Since the last Congregation meeting, held in April 2019, a lot has happened in terms of addressing the infrastructure in the University. Some were commissioned by the Vice President, Professor Yemi Osinbajo, SAN, GCON. A few of these are the Olympic size swimming pool, The completed TETFund sponsored Publishing House for the South- West Zone, Extension of the University Medical Centre Building, and Faculty of Engineering Lecturer Theatre. As part of the university’s Town and Gown association, Alhaji Femi Okunnu is sponsoring the upgrade of the Faculty of Law Building. The Building will now have an additional floor with a remodeled exterior work. The project will be completed soon.

On Alumni issues, the president of University of Lagos Alumni Association of Dr. John Momoh OON noted recently that the Alumni Association has secured some gains in the last few months, in addition to the many by the preceding executive that handed over to his team. The Alumni set of 1997 of the College of Medicine undertook a renovation worth N16m of the toilets and bathrooms in Block 4 and 8 of the student Hostel. They also renovated the wing B (OPH)- Female Hostel toilets. The bathrooms and kitchenettes was done by 1998 Alumni set in the College of Medicine to the tune of 12m.The Renovation and furnishing of the Faculty of Dental Sciences’ Library was done by Dr. Bolaji Ogundare (an Alumnus). Who also handled the rehabilitation of the medical Students Hostel Access Road. ”Sir Olu Okeowo donated a Physiotherapy Centre to the College of Medicine. The building is worth N750m. “We want to sincerely thank all our donors for their kindness and philanthropic gesture which is helping in great measures to uplift the University of Lagos.”

There are plans to build an iconic students’ hostel within the axis of the Akoka campus, as part of the grand design to creatively change the landscape of the University. Bravo! to these “old boys and girls” for thinking it right to come back to assist in the development and growth of their Alma mater. Within this scope too is the approval granted by the immediate Governor of Lagos State (An Alumnus) Mr. Akinwunmi Ambode for the remodeling of the University gate. This will definitely change the aesthetic - look of the University. This project is expected to be completed before the end of first quarter of 2020. (Andrew Aroloye was a former Director, Centre for Educational Technology, University of Lagos Akoka).