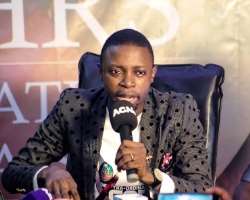 The Convener of the Osun 24Hours Marathon Praise, Apostle Lawrence Bamilaw has unveiled the 2019 edition of the event which will hold this Friday in Osogbo, Osun State capital.

At a press conference held at the Correspondents' Chapel of the Osun State Council of Nigeria Union of Journalists in Osogbo, Apostle Bamilaw said the Osun 24Hours Marathon Praise will take place at the Union Baptist Church Cathedral, Odi-Olowo area, near Olaiya Roundabout in Osogbo.

Apostle Bamilaw said the Osun 24Hours Marathon Praise would kick off at 3:00 pm on November 22 and continue till 3:00pm of the following day (Saturday) with intense praises and Warship by ministers of God and Brutal Apostolic Declarations.

According to him, "On Friday, we will converge at the Union Baptist Church Cathedral, Odi-Olowo area, near Olaiya Roundabout in Osogbo for this year edition of the Osun 24Hours Marathon Praise. We will praise God and he will perform miracle in our lives. He will answer our prayers."

"The extraordinary God would do miracle when we praise Him. We are going to start the Osun 24Hours Marathon Praise at exactly 3:00 pm on Friday, November 22. We will be praising Him till 3:00pm of Saturday, the following day, November 23."

"Ministers of God will be there to minister into the lives of the participants and people will receive blessing. Those that attended the previous editions of the Osun 24Hours Marathon Praise have testified to the work of God in their lives and for those that will attend the 2019 edition, their lives shall not remain the same."

Apostle Bamilaw used the medium to appealed to the Federal Government to take necessary steps to tackle the problem of moral decadence among youths in the country so as to curtail vices and curb insecurity in the country.

He noted that the youths are exposed to obscene content in the media particularly on the DSTV. He tasked government agencies saddled with regulatory responsibilities to prevent DSTV and other media platform from misguiding the youths and little children. He condemned the Big Brother show, saying that the manner adult romanced and had sex on the show was condemnable.

His words "I wish to use this opportunity to appeal to President Muhammad Buhari to do the needful in dealing with the challenge of moral decadence among Nigerian youths. The kind of videos that our youths are watching on DSTV will not help the situation. It will further complicate our problems."

"Children watching ladies dancing naked and boys smoking Indian hemp with impunity is a dangerous situation. The kind of things youths and children are watching on DSTV and learning from it are such that will further aggravate insecurity in the land because more young Nigerians tend to become criminals as a result of this."

"On our part, apart from preaching, we are also taking concrete steps to divert the attention of the youth from criminal tendencies and we are engaging a good number of youth in productive activities. Government must play its role in terms of monitoring and regulating what DSTV and other TV outfits broadcast.

Apostle Bamilaw reiterated the need for government to formulate necessary policies that monitor and regulate the kind of musical videos that television stations in the country could broadcast.

Apostle Bamilaw disclosed that a new Non Governmental Organisation, Apostolic Grace Network Africa has been set up with a mandate to restore dignity back to the society and also bring people out from hopeless situations through the Anointing and Skill Acquisition and Empowerment.

Apostle Bamilaw also said that the Apostolic Grace Network (AGN) TV will soon hit the airwaves. " With the arrival of the TV Box Decoder sample this NGO is positioned to counter the Indecent and Immoral Content flying on the secular TV. AGN TV is positioned toward the future of Broadcasting, Digital Television Brands like Netflix, YouTube and son on."

"As part of its social responsibility, this new NGO has placed an old man of 71 years on a lifetime Salary every month, since mid of 2019. The man fell from electric pole in 2005 and became helpless. There are many other packages for people, young and old, including the widows, widower".