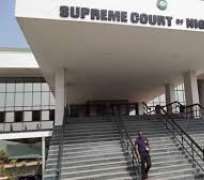 Onitsha, Eastern Nigeria, Tuesday, 19th Nov 2019-Henceforth, there shall be no addition by Intersociety of distinguished titles of ‘Honorable’ and ‘Lordship’ or ‘Honorable Justices’ and ‘Their Lordships’ and their singular components to the names of all serving Justices of Nigeria’s Supreme and Appeal Courts. This is until further notice. The pronouncement is our moral protest against the named for their anti democratic roles in the 2019 Presidential Poll court proceedings and their verdicts. In placing the moral protest against the named, the principle of vicarious liability or responsibility was applied. The most undoing of it all by the two Courts was brazen denial of fair hearing; the grand foundation of the Judiciary as the ‘last hope of common man’.

The country’s Supreme Court and Court of Appeal, apart from introducing Ape Quotient as a new criterion for vying for elective public offices in the country, have also legitimatized and revolutionalised ‘kill-and-bury’ politics in the country’s electioneering and momentarily, if not permanently deleted the due recourse to judicial remedies and their hopeful expected outcomes. What just played out in the Bayelsa and Kogi State staggered gubernatorial polls is just the beginning. The newly rubber stamping roles of the country’s judiciary in matters of election court cases now provide political actors in Nigeria with violence and bloodletting, military and police supervised rigging and other forms of electoral fraud and brigandage as the only option left.

The above was the position of Int’l Society for Civil Liberties & Rule of Law-INTERSOCIETY as contained in a statement issued today in Onitsha and signed by Chinwe Umeche, Esq., Head of Democracy & Good Governance, Obianuju Joy Igboeli, Esq., Head of Civil Liberties & Rule of Law, Samuel Kamanyaoku (Comrade), Head of Field Data Collection & Documentation and Emeka Umeagbalasi, Chair of the Board ofIntersociety.


In other words, letters and other public references to the serving Justices of Supreme Court or Court of Appeal shall henceforth bear common titles of ‘the Justices of the Supreme Court’ or ‘the Justices of the Court of Appeal’. Their greeting titles shall change from ‘Their Lordships’ to ‘Sirs’/’Madams’ (designed in moral law or ethics for men and men with older ages). Singularly, it shall no longer be ‘the Honorable Justice’, but ‘Mr. Justice’ or ‘Your/His Lordship’, but ‘Sir’/’Madam’. This moral position or obligation of ours excludes lawyers and criminologists working with Intersociety. The exclusion is only in their individual and ‘outside-our-group’ capacities. They are at liberty, in their private capacities, to choose otherwise.

For the avoidance of doubt, the advanced dictionary checks concerning the title-honorable indicate that the title is a noble title meant for people of noble character and conduct such as unstained, incorruptible and distinguished judges in the hallowed chambers of justice. As a matter of fact, it is defined by the Dictionary of Competent Reference as (a) bringing or worthy of honor, and (b) used as a title indicating eminence or distinction, given especially to judges and certain officials of high honor. The same Dictionary defines ‘lordship’ as a noble or respectful form of reference given to a judge or bishop or a man of respected character and conduct.

Nigerians and other people of good conscience are therefore invited to determine whether the serving Justices of Supreme Court and Court of Appeal, vicariously speaking, are still truly worthy of bearing such impeccable titles in view of their recent outings over the post 2019 Presidential Poll court proceedings and verdicts. In the immortal words of late Bench/Juridical icon, Oputa C. (JSC), ‘a corrupt or stained judge is worst than a mad man (mentally imbalanced) man running amok with a sharp machete in a crowded market place’.


Statistics:
Undemocratic Role Of The Court Of Appeal
It is still shocking and unquenchably saddening that against all odds or despite damnable reports by several internationally respected election monitoring bodies, the Nigeria’s Court of Appeal, serving as the ‘court of first instance’ in the Presidential Election Petition Tribunal, magisterially and dictatorially reverted to ‘technical justice’ to legitimatize the controversial poll. The Court deliberately refused to dispense justice fairly and credibly especially in strictness of the 180 days provided or allowed.

Despicably and condemnably, the President of the Court of Appeal, the same authority that constitutionally constituted all Election Petitions’ Tribunals in Nigeria including Presidential Poll Tribunal; additionally introduced ‘politics of non-recusement’ and insisted on ‘being a judge in his (her) own case”. The PCA deliberately dragged his (her) refusal to step aside from the Panel for weeks, before sluggishly stepping aside.

In the end and going by our counting, 113 days were deliberately wasted out of the constitutionally allowed 180. This was a crucial matter filed since 18th March 2019. The Court finally commenced hearing proper on 1st July 2019 when it ordered the lead-petitioners to present and proof their case in ‘ten days’; thereby leaving only 67 days for all the parties and adjournment period for the judgment of the Court, delivered on 11thSept 2019 or barely seven days to the 180 days constitutional deadline.

The most shocking and disappointing of all was that the lead-petitioners who pleaded for 400 witnesses and tendering and defense of bundles of election related documents including INEC server controversy, were given only ten days to ‘proof their case beyond reasonable doubt and/or based on preponderance of evidence (i.e. the quality or fact being greater in number, quantity or importance)’. This was also a case requiring round-the-clock sittings including at weekends. As voluminous and widespread as the case was, the Court had only 180 days mandate involving judicial inquires into how the election was conducted in the country’s 176,000 polling units; yet the Court wasted 113 days and said nothing in the end.

Undemocratic Role Of The Supreme Court
The Supreme Court, on its part, also wasted 50 days and delivered the ‘fastest Supreme Court judgment in the history of Nigeria’. By Law including the 1999 Constitution and the Electoral Act of 2010, appeals arising from the Presidential Election Tribunal (Court of Appeal) shall be looked into and determined within 60 days from the day of delivery of the lower court judgment. As a matter of fact and strong condemnation, the Supreme Court deliberately declined until ten days to the expiration of the constitutional 60 days deadline. Like the mode of the meetings of ‘the Supreme Military Council’ or the ‘Armed Forces Ruling Council’ of Buhari, Babangida and Abacha khaki days, the Nigeria’s Supreme Court hurriedly sat on 30th Oct 2019 and dismissed the lodged appeals under less than two hours of the same day.

Apart from its failure to remedy the blunders of the lower court by way of denial of fair hearing, the Supreme Court also appeared as if it had impeached the Constitution through a new and strange ‘case-law’ to the effect that henceforth, ‘it is no longer legally or constitutionally required for those seeking to be elected into elective public offices including the office of the president to submit their educational certificates at relevant quarters and have them publicly and judicially proven or certified’. By this, the Nigeria’s Supreme Court has broken a world record of negatively immeasurable standard, where Apes wherever they are can now vie for any elective public office in the country.

Independently speaking, it is likely safe to say that over 90% of the serving judges in Nigeria including those of the Supreme Court and Court of Appeal are victims of judicial career suicide because they live far above their legitimate incomes or earnings; thereby making themselves prone or putting themselves at high risk of state terrorism and other forms of threats and unsafe conditions. Becoming a serving judge in Nigeria forbids the beneficiary from engaging in other lawful means of livelihood including practicing as a private lawyer. They holistically rely on Government by way of monthly remunerations including basic salaries and litany of prescribed allowances; all known and tabulated by the Government including its anti graft and secret service agencies.

That is to say that if a serving judge including a Justice of Supreme Court or Court of Appeal is found by intelligence reports or credible suspicions to own developed or undeveloped properties (immoveable) (i.e. private mansions, oil and gas stations, industrial farms, student hostels, hotels, built and leased houses and companies, etc) or moveable properties including huge cash deposits or company shares or multiple domiciliary accounts and money laundering, etc as well as immoveable and moveable properties outside the country; then such a serving Judge or Justice is likely to be directly or vicariously liable for immorality and corruption charges, if investigated or questioned or strongly suspected.

Once this is the case, the affected Judge or Justice becomes a castrated king and does the dirty biddings of his or her blackmailers or would-be blackmailers including officials of the present Government of Nigeria. In other words, to find an unstained and incorruptible serving Judge or Justice in Nigeria is not totally absent but tough and hard. Judicial Career suicide includes undermining of fair hearing, rule of law and democratic principles and processes as well as legitimizing the illegitimacies and illegalities of Government in power or its officials through judicial proceedings, orders and judgments. For the avoidance of doubt, therefore, the SSS, CCB, EFCC and ICPC should investigate and compile all liquid and solid investments or properties of all serving Justices of the Supreme Court and Court of Appeal in Nigeria and outside the country and make them public.