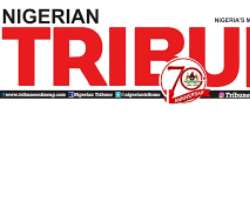 1949 was a landmark year for the late sage, Chief Obafemi Awolowo. It was the year he turned fourty and as the age-long cliché goes ‘Life begins at fourty.’ It was the year the socio-political group, ‘Egbe Omo Oduduwa’ which later metamorphosed into the Action Group was founded in England and it was also the year he founded the Tribune Newspapers.

Having worked as a journalist before he went to study law in 1944, he understood the importance of having a media outfit to effectively project one’s views especially if the person involved was a politician.

The privately owned newspaper that was the rave in the then western region was the Zik Group of Newspapers which was radically nationalistic and perfectly understood the vagaries of the business so well that despite the fact that it was denied advertising by the colonial masters, it was still a very profitable business venture. Tribune seemed to have come to the market twelve years too ‘late’ but the competition didn’t deter Awo as he was fondly called by his supporters from berthing into the rather crowded market.

The precise time of entry was November 16, 1949. Awo deliberately made it so because of the great respect he had for Zik as that day was the latter’s 45th birthday. The paper was headquartered in Ibadan – the then residence of the sage and it began its publications in earnest.

The Tribune served as the propagandist mouthpiece of the Action Group and was massively deployed to sell the welfare programmes and policies of the government to the people. It wasn’t as nationalistic as any of the papers in the stables of the Zik Group of Newspapers most notably the West African Pilot. Its stance was the sturdy backing of regionalism which it advocated as the best form of government for the country.

It still contributed its quota towards the independence efforts as it gave a lot of vibe to the independence motion moved in 1953 for Nigeria to be independent by 1956. Its scathing editorials lampooned the Northern Nigerian legislators who used their majority in the parliament to roundly defeat the motion with the catch phrase ‘As soon as practicable.’

The paper also tilted towards the advancement of the cause of the downtrodden and marginalized in the society. Being the vision of a progressive, it wasn’t amazing that the paper could take such a stand. It helped sell the widely popular free education policy at the primary level as well as the free healthcare scheme for all children resident in the then western region. The masses and proletariat easily connected with the paper as it told their own stories from their prism.

The paper attracted the best of journalistic minds that went on to mould it to suit the tastes of its teeming readers. The pioneer editor was Akin Allen, a Kings College Old Boy whose incisive editorials and articles kept the colonialists on their toes. The coming of Alhaji Lateef Kayode Jakande as Editor of the paper in 1956 opened up a novel watershed for the paper as it took on the colonialists as well as the regional governments of the day by boldly holding them to account. Awolowo as the Publisher never interfered with the editorial policy of the paper and took the criticism of his paper from his employees in good faith while he was the Premier of the Western Region between 1954 and 1959.

The paper weathered the political storms of Nigeria in both civilian and military rule and was known to give the then military dictators sleepless nights which attest to the fact that the pen is mightier than the sword.

The paper suffered a proscription in 1995 when the junta of the then General Sani Abacha proscribed nearly all Nigerian newspapers who were opposed to his bid to succeed himself as a civilian leader. The paper bounced back into reckoning after the ban was lifted and has been on the newsstands as well as being digitally media compliant.

One thing that stands the paper out is its resilience and the proof of its power over time. It is different from the business norm of one man owned businesses that fail to outlive their founders. Awo was behind bars from 1963 to 1966, died in 1987, his wife, Hannah Idowu Dideolu Awolowo took over as the Publisher and died in 2015 yet the paper still stands tall and proud. Business owners especially those of small and medium scale businesses have a lot to learn from the sage even in his earthly demise.

Through the daily reading of his newspaper via online and offline, he has ensured his immortality as his values and ideals still hold sway in the minds of the millions of his readers.

This is wishing the entire Tribune team a Hearty 70thyear anniversary and we hope to gather again, five, ten, twenty, thirty and more years from now to continue to clink the glasses.