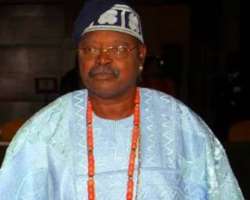 The eternal words of English dramatist and poet and arguably the greatest writer in the English language, William Shakespeare ring through with the recent death of the above named great icon. ‘When beggars die no comets are seen but the Heavens themselves blaze forth at the death of Princes.’

Chief Alex Akinyele, an illustrious son of Ondo state wasn’t a prince by virtue of his birth. He was born a plebian and had to pull himself by the bootstraps to attain the heights some blue-blooded royals could only dream of.

Armed with a good education from the then University of Ife now Obafemi Awolowo University which in the good old days of Nigeria was a leverage for upward social mobility; he joined the Nigerian Customs Service and left as the pioneer spokesman of the government agency. He was also the Secretary-General and later President of the Nigerian Institute of Public Relations. He had his hands in many successful business ventures after his rather early retirement from the Nigerian Customs Service.

Public service beckoned on me when the then Military Head of State, General Ibrahim Badamosi Babangida head hunted him for the role of the nation’s information minister. He used his natural charm and persuasive skills to sell the government policies to the people. His skills came in very handy when dealing with the Labour Unions who could be headstrong on some occasions. Having performed creditably well, he was moved to the National Sports Commission as its Chairman.

In his first media briefing, he confessed to not knowing much about sports but would do his best to perform well. He was credited to have resolved the lingering crisis between the Sports Writers Association of Nigeria (SWAN) and the sports commission. He also resolved many crisis which affected the welfare of footballers and other sportsmen.

Like most successful men, he was a great lover of beautiful women. His first wife was from South Africa and was a beauty to behold while in her prime. After she passed on to the great beyond, he married a former Indian beauty Queen and then finally a mixed race Nigerian who is a nurse like his first wife.

He was a great community leader who impacted massively in his native Ondo state. So passionate was he about the development of his state that he relocated there at the twilight of his life to be closer to home and nature.

Even though he was never a journalist, he had a great love for the media as he was an investor in the once popular now defunct News Watch Magazine which greatly held the IBB government to account so much so that its editor-in-chief, Dele Giwa was brutally dispatched to meet his ancestors via a parcel bomb on October 19, 1986.

In 1995, the government of General Sani Abacha made him the Head of the National Reconciliation Committee to oversee the midwifery of the nation’s democratic transition process.

He was found to serve his nation meritoriously and without the usual blemish of his hands being found in the cookie jar – the norm among most public office holders in the African continent’s most populous nation.

It is rather tragic that he never had the time to write his memoirs so that the younger generation could tap from his vast reservoir of wisdom even after his earthly passage. I suggest that journalists and writers should endeavour to write about our heroes especially while they are still on the planet earth as one way to ensure immortality is through the written word.

We hope his family finds the fortitude to cope with this irreparable loss and God should comfort them greatly in this trying time of theirs. The loss of a loved one no matter the age is usually a source of sorrow and great pain.

May his gentle soul find eternal rest from life’s labours.