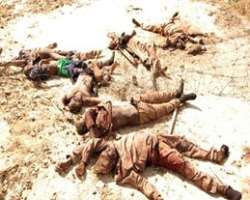 In what can be best described as the kicking of a dying horse, some marauding Boko Haram criminal elements met their waterloo yesterday, the 13th November 2019 while attempting to infiltrate the location of 64/98 Task Force Battalions and elements of Armed Forces Special Forces Battalion deployed at Mallam Fotori in Abadam LGA of Borno State. The insurgents attacked the location with Person Borne Improvised Explosive Devices, Gun Trucks, Rocket Propelled Grenades (RPG) and other small arms. However, the dogged troops responded swiftly, outgunning and decimating the cowardly criminal insurgents and forcing them to withdraw in disarray. Notwithstanding, it was apparent that most of the criminal Boko Haram insurgents escaped with serious gunshot wounds as traces of blood were seen along their escape route. At the end of the encounter, 3 Boko Haram criminals were neutralized, 2 of their Gun Trucks were destroyed while 3 AK 47 Rifles and one Anti-Aircraft Gun were also captured from the insurgents. Regrettably, one soldier paid the supreme price while 4 other soldiers were wounded in action. The wounded soldiers are currently in a military medical facility and are positively responding to treatment.

The Theatre Commander, Operation LAFIYA DOLE Maj Gen Olusegun Adeniyi on behalf of the Chief of Army Staff, Lt Gen Tukur Yusufu Buratai conveys his message of encouragement to the troops for a job well done. He further admonishes them to continue mounting pressure on the insurgents until they are forced to total submission.

You are please requested to disseminate the above information to the general public for awareness. Thank you for your usual cooperation.