As Gov. El-Rufai kneels To Beg Kogi People
By The Nigeria Voice 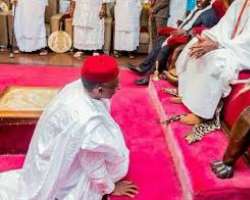 Governor Nasir El-Rufai of Kaduna State went all out on Thursday, going down on his knees to canvass support for Governor Yahaya Bello’s re-election bid.

El-Rufai who is also the Chairman of the All Progressives Congress Gubernatorial Campaign in Kogi State made the gesture at a mega rally held for the governor in the state capital Lokoja.

“Many people say Yahaya Bello is young and that he has fought many people. For every one that the governor has offended, I am asking all of you to forgive him. He is young, he is supposed to make mistakes. When you are young, you make mistakes, but you are supposed to learn from him. On his behalf, I am kneeling down to beg all of you to forgive Yahaya Bello if he has offended you,” the governor said.

Beyond seeking forgiveness for whatever mistakes the governor had made, Governor El-Rufai praised him for his performance and took a swipe at the Peoples Democratic Party, urging the people to “bury PDP once and for all”.

He claimed that although the PDP had ruled the state for a long time, they “have done nothing” in the state.

“In the past four years, the progress recorded by the APC government under Governor Yahaya Bello is more than what the PDP has tried to do in 13 years,” he said.

Whatever might have happened in the first tenure of Governor Bello, El-Rufai appealed to the people to know that he cares about the people of Kogi State.

“You must all come out and support him. I beg you all.”

Among those who canvassed support for the Kogi governor at the rally ahead of Saturday’s election were the wife of the President, Mrs Aisha Buhari; wife of the Vice President, Mrs Dolapo Osinbajo; and the National Chairman of the APC, Mr Adams Oshiomhole.

Also, the wife of the President of Nigeria, Aisha Buhari, has told Kogi residents to forgive and forget all that their governor Yahaya Bello has done to them.

Mrs. Buhari made the appeal on Thursday during the All Progressives Congress (APC) rally held in the state, ahead of the governorship election slated to hold on November 16, 2019.

She told the residents that following the President’s intervention of the payment of salaries in the state, the citizens will not be disappointed if they vote for the incumbent governor.

“My husband used to emphasise on salaries, it took a while for the Kogi salary payment to get settled after a long time of verification.

“But this time vote for him for continuity of payment of salary on time”.

Mrs. Buhari asked the governor to assure the residents of early payment of salary which Mr. Bello pledged his support to ensure that civil servants get paid on time.

She also commended the state for having the less number of out of school children in the country, according to the survey of UNICEF. – Channels.