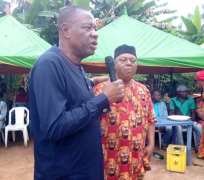 Senior Special Assistant on Project Monitoring in the Office of the Deputy Governor of Imo State, Architect Zach Ijeoma has called on people of the State to continue to keep faith with the administration of Governor Emeka Ihedioha, describing it as the best thing to have happened to the state.

Ijeoma, who made the call while addressing hundreds of stakeholders in his home town, Egbuoma, Oguta Local Government Area of Imo State argued that the few months of reign of Governor Ihedioha has given hope to people of the state. “I invited people from different political parties to formally inform them of my new appointment as SSA, Project Monitoring to the Deputy Governor of Imo State. I invited people across party lines to come and join the Rebuild Imo Government in order to add their quota to the development of the state. You can see that the few months that the present administration in the state has stayed, has given our people home. They are doing things that people can see.”

“I urge people of Egbuoma, Oguta LGA and Imo State at large to continue to keep faith and support the Rebuild Imo administration in order to secure the future of generations yet unborn.”

Continuing, he expressed gratitude to the Deputy Governor, Engr. Gerald Irona for what he described as his exemplary leadership style, urging him to continue with his good works.

He expressed optimism that people of the area will benefit from the present administration, regretting that previous administrations in the state, in spite of having some top members of the government from the area did not impact the lives of the people. Deputy Chief of Staff, Office of the Deputy Governor, Sydney Uneanya addressing the audience during the event while Architect Ijeoma watches

Adding his voice, Deputy Chief of Staff, Office of the Deputy Governor, Hon. Sydney Uneanya commended members of Egbuoma community for what he described as their commitment to supporting the administration of Governor Ihedioha, assuring them that they will not be disappointed.

He further lauded members of opposition political parties in the area for putting aside their political affiliations to support the administration of Rt. Hon. Emeka Ihedioha.

Uneanya used the occasion to pour encomiums on Architect Zack Ijeoma, describing him as an indefatigable politician, who has made his marks in the sands of time, urging people of the area to continue to have faith in him. SSA, Political, Office of the Deputy Governor Damian Ezeagu raising the hand of Arc. Ijeoma during the event

“I urge you to come together in support of the administration of Governor Emeka Ihedioha. I commend the entire Egbuoma community, particularly, members of opposition parties in the area for putting aside their political affiliations and coming together to support the present administration. This community has produced a Secretary to the Government of Imo State. This community has also produced a former Minister of States for Education and an in-law to a former Governor, but you do not have roads; you do not have water; you do not have electricity. Within few months of the present administration, they are already working on fixing electricity in the community. I assure you that the Emeka Ihedioha and Gerald Irona administration will not disappoint you.”