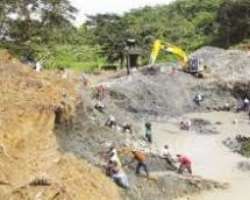 Following the diversion of Solid mineral products out of the state, Ebonyi state government has sealed some mining firms for operating illegally.

Special Assistant to Governor on Solid Mineral Development, Hon. Edwin Onwe who disclosed this in Abakaliki while briefing journalists said that plans has been concluded to install cameras on borders linking the state to stop illegal movement of solid minerals of the state out.

Onwe alleged that solid minerals belonging to the state were being diverted out of the state through Cross River, Enugu and Abia states adding that taskforce has been posted to various mining sites in the state to monitor what is happening in the sites.

He said, “the government of Ebonyi state has frowned on illegal mining in the state, just few days ago, I personally posted Technical Assistants to all the mining sites and all the borders; our borders between Abia and Enugu , I posted some people who are monitoring what is happening there. That of Enugu and Ebonyi, I also posted the TAs who serve as taskforce in this ministry.

“At the quarry sites, I posted some youths who are recording what is happening there. So, at the end of every week, they feed me back. In no distant time, all these leakages will stop. We also intended to put cameras in all the borders; that of Abia and Ebonyi, Enugu .

" We are trying to stop a situation where some investors are moving our solid minerals illegally. Some are moving through Cross River, Enugu and Abia.

“When I came into office, the internally Generated Revenue was about 4 million naira in a month but immediately I was inaugurated three weeks after our inauguration we generated N20 M and some fraction and as we are talking now we have generated from that time we were inaugurated till now over N60 M.

“About three days ago at Ishiagu alone there is a company called paladon Nigeria limited they paid N11 M for the materials they lifted and by today or tomorrow a man called mayor will pay about N4 M you can see N11 M and N4 M within how many days.

“So the ministry has drastically changed in every ramification since i was chosen by thousands of people in the state to serve in this special ministry. I'm not going to compromise with anybody, few days after my inauguration, we went and sealed a company that was operating illegally and the man came to my office and was telling me my brother see how we use to do it and I refused and the man was forced to open up telling me that he had N2 M for me. I said go and pay that money you are owing N5 M plus, go and pay that money to our account, my office does not entertain cash we only accept clearance form”.