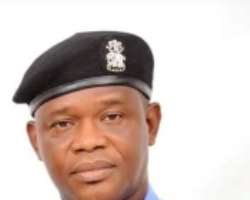 News filtered into town on Tuesday 12 November 2019, that Efeizomor, son to the traditional ruler of Owa kingdom and kin to the state governor, Dr. Ifeanyi Okowa, molested artisans at their workplace.

Trouble started on 1st November 2019, when the CSO abandoned his duty post for lunch at a rickety local food vendor to eat his native soup called Ofejuju and pounded yam by House on the Rock Church along Delta Broadcasting Service (DBS), road Asaba, while his driver blocked the entrance to a mechanic workshop in same premises. The rickety structure of the local restuarant where the CSO came to eat.

It was reliably gathered that the mechanic, Mr. Ola Coker, who was on a test drive of a customer's car returned and discovered that the entrance to his workshop was blocked, he decided to park awaiting the occupants of the vehicles.

On return, the CSO discovered that his car was blocked and requested to know who blocked his car, Mr. Coker emerged and was trying to explain to the son of Obi Emmanuel Efeizomor, when the CSO allegedly ordered his junior officer to slap Coker.

On sighting the way and manner his eldest brother was treated by the CSP on mufti, the younger brother to Ola, a panel beater, Ema Coker, on same premises approached and accused Okowa's CSO of being unfair to his brother but he got two slaps that landed him at the Federal Medical Centre (FMC), Asaba, after he sought for safety from the two slaps.

Also, another artisan who repairs vehicle airconditioner, Mr. Andy Okeibunor, who also tried to wade into the matter, was not spared as the CSO allegedly pounced on him.

It was gathered that no fewer than five persons purportedly got slaps from the CSO before handing Okeibunor, over to the about five red beret officers whom Efeizomor called to do a finishing work.

It was learnt that the artisan who specializes on vehicles airconditioner was allegedly beaten with boots before he was moved to GRA police station in the booth of the Hilux van the red beret officers came in and was detained.

Just like a scene in Africa Magic movies, an artisan (name withheld), said the slaps came unexpectedly and unimagined that could not be avoided. The Cokers however escaped the second round of beating as they left before the red beret officers arrived the scene.

It was also gathered that another artisan, a welder on the same plot of land was almost lynched for daring to ask questions.

Narrating his ordeal in the hands of the son of the Delta north monarch cum Chairman, Delta state council of traditional rulers, Ola Coker, said: "Yes, we were beaten in my shop, I parked a car then the owner of the car asked me to test the motor, then I went out. As soon as I came back, I saw two cars parked behind the car I was meant to repair. However, I had another customer whose car I parked beside the two vehicles I saw at my workshop. I asked my people around about who parked the two cars in front of my workshop and they told me they did not know.

"Then I began to hear a loud voice shouting “ who parked this car here. When I saw him I explained to him that I asked about the cars but no one said anything. He then told his orderly to slap me and I was slapped.

"Then my brother came out and asked him why he told his orderly to slap me, immediately he slapped my brother. He beat up many people.

"As soon as this happened people gathered and he started calling red beret people. Then we decided to leave, then the AC man, Andy Okebunor pleaded with him to stop but he took him to the police station.

"I did not know who he was before until he called the Mopol officer to slap him. It is then that people around started saying he is the CSO of government house. He threatened even told me that he will shoot me and throw my body away. People gathered and pleaded with him but he remained adamant".

Asked what transpired when the red beret officers arrived the scene, Ola said: "He carried the AC man to the police station. At the end of the day, we had to bail the AC man with N10, 000. He has never repaired a car in this workshop but he comes here to eat.

"After the beating, I was not feeling fine, I had to buy some drugs as soon as I got home. Before that time I took my brother, Emma Coker to the hospital.

"I have treated myself and I feel better. Why i did not report was because, as he mentioned he was going to shoot me and nothing will happen.

"A day after the event one of my customer saw me and asked me what happened, I told him about what happened then he took the case further. I was interviewed on the issue and we met Human Rights people and I told them my story. Commissioner of Police is aware because we have written a petition. Mr Ola Coker, the owner of the workshop where CSP Efeizomor parked

"I am surprised that it feels like a poor man cannot live in this country because when people are in power they begin to oppress people. They are making things difficult for artisans because they treat us without respect.

"I have been an artisan for 21 years, the insult is too much, they should try to make laws to protect people like us. They should come and help me because the situation was unfair. He told me if he shoots me, no one will ask him because this is his town, he told me he is the son of a king.

"When I found out he was a Chief Security Officer in Government House, I wondered if he was sent. My brother is still in the hospital because his two eyes were affected as a result of the beating. He is at Federal Medical Centre (FMC), Asaba but I want to take him to another hospital because I feel there is no progress. I cannot count how much I have spent on myself not to talk of my brother and Andy who were brutally beaten", Coker explained.

Also, Mr. Okeibunor, the airconditioner repairer said his sin was for him ask questions on why the son of the Obi of Owa, would allegedly melt out inhumane treatment of law abiding citizens.

Hear his version: "when I saw the way the CSO was beating up Coker, I decided to approach the officer and he slapped me. He told me that this is his land and I said I have been here for about 20 years now.

"It was at that time, he made the call and five police officers with Hilux van arrived and he pointed at me to them that I am the one challenging him. They beat me, match my chest and throw me on the booth of the Hilux van. He too came to match me before they took me to the GRA police station".

According to him, one of his customers brought out N5, 000 and he added another N5, 000 totaling N10, 000 which the DPO allegedly collected for his bail.

He expressed sadness over the situation despite that all of them in the premises voted for the governor during the 2019 governorship election.

"I am not happy, two days I didn't come to work. I lost several jobs on that day. I am still suffering from the shock as I talk to you, I have not been able to compose myself. All of us here have PVCs and we voted for the governor. I don't think anybody here voted for APC, I don't know why someone in the government will come and beat us where we find our daily bread".

He called the government to adequately compensate those beaten and injured.

Meanwhile, some of the respondents who also expressed their worries said the attitude of the officer contributes majorly to the reasons why young boys no longer learn hand work.

They said the intimidation from those in power drove many young boys into "Yahoo, armed robbery" just to get rich quick, "we are not yahoo boys. This is where we get our daily bread to feed our families", they wept.

They also lamented that the owner of rickety structure from Agbor, was told during a meeting that since she has large customers she should clear the bush behind her structure where car owners who come to eat could park without obstructing the businesses of others which she turned deaf ears to till date.

It was gathered that the cheapest plate of food is at N1, 000.

Investigation however revealed that the CSO's lawyers are allegedly lobbying them for settlement as they have entered into a peace talk awaiting for its outcome today.

But an activist, Mr. Victor has vowed that he would get to the root of the matter for justice to take its course while the CSO should be used as a scap-goat for other would be intolerance officers to learn.

It would be recalled that on Friday 6th November 2019, a journalist with The Xpress Newspaper, Mr. Godwin Udoh, was assaulted by police officers attached to the governor at the premises of the Delta State House of Assembly shortly after the governor presented the 2020 budget while briefing journalists on the content of the budget.

Also, on Thursday 7th another journalist with the Champion Newspapers, Elder Barry Agbanigbi, was tortured by unidentified police officers around the FMC roundabout.