Shares N30,000 to each one
By Sadiq Abubakar, The Nigerian Voice, Maiduguri 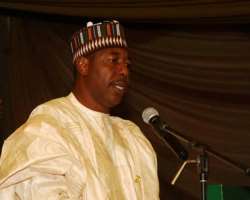 Borno State Governor, Processor Babagana Umara Zulum has, within the last two months, released over N384 million for disbursement to different categories of vulnerable persons as beneficiaries under the newly introduced State Social Protection Scheme (SPS) of the present administration.

The State Commissioner for Poverty Alleviation, Pharmacist Nuhu Clark who disclosed this Tuesday, said that, the scheme would be a continuous process.

According to him, 3, 127 physically challenged persons; majority of whom were into street begging were amongst more than 7,000 persons given N30, 000 cash each across the state to engage in self reliant petty jobs.

He added that the scheme was aimed at preparing grounds for the enforcement of the government’s ban on street begging in the state.

The commissioner further said that out of the physically challenged population, a total of 1,550 crippled persons, 357 lepers and 189 deaf persons have so far received the financial support whilea total of 1,037 blind persons will receive theirs today Tuesday when government flags off a scheduled distribution in Maiduguri, the state capital.

Clark noted that apart from the 3,127 physically challenged persons from across the state, another 2,862 youths from Maiduguri and Jere LGAs were given N30,000 caah each on monthly basis, noting that, the scheme is expected tolast for six months.

The commissioner also disclosed that another 1,092 petty traders from the famous Monday have alao been given N30,000 each.