The year of Nigerian girls 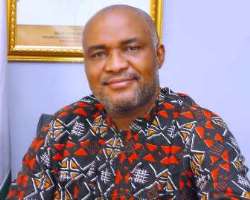 I walked into one of the highflying finance houses in the Central Business District of the Federal Capital of Nigeria for a brief business meeting in the morning of Tuesday November 12th 2019.

As I walked in, I met a very beautiful front desk assistant who had only just delivered her first child but has already resumed duty. She works in a bank that has gained reputation for employing only beautiful girls who are of fair complexion.

I congratulated her over the feat and inquired what the gender of her baby is.

This cheerful banker looked straight into my eyes with joy and announced that she gave birth to a male child.

I congratulated her once again and jokingly told her that in those days, in most parts of southern Nigeria, (and even now amongst traditional Igbo homes) when a new wife gives birth to a male child, it is a sign that her marriage is finally confirmed since she has delivered a bonafide beneficiary to the inheritance of the father of the house.

We both laughed over it but she quickly reminded me that the times have changed and that the gender of the baby in a family no longer matters.

As someone with a human rights and journalism backgrounds, I replied her statement by affirming that indeed in Nigeria and Africa, the girl child has arrived.

I say so because the saying that he who educates a female baby educates a whole town is not farfetched going by the fact that the capacity building of a girl child who would go on as a woman to procreate childrem will make much more meaningful impact because as a mother who understands the essence of intellectual and skills development, the children that come from such a marital union will immensely benefit from numerous educational trainings and exposures.

It is also factually correct to state that the more educated and skillful a child becomes the better for the society since the child would grow up into an adult that creates employment opportunities and a creator of wealth.

As I write, some very wealthy Nigerians have displayed what can adequately explain my assertion that this is the year of the girl child going by the intensity of faith that these daughters and the enormous and tasking responsibilities they have bestowed on these girls.

Two cases will suffice even as I will give a further example with a very brilliant girl Sandra Ifejika from not too well to do family who went on to bag a first class degree in law from the prestigious Nnamdi Azikiwe university and then made a double at the equally prestigious Nigerian law school where she just bagged a first class. Miss Promise Mmaduboobu of the law faculty of University of Nigeria had last year made a similar phenomenal academic feats.

The two girls or should I say ladies whose stories are worth recording and made a reference point are the daughters of Femi Otedola and Aliko Dangote.

Aliko Dangote is easily the richest living black African even as his friend Femi Otedola is rated as one of the richest living Nigerians in contemporary times. Both men have showed us a positive lesson that if a son can do it, a daughter can do it as well.

Whereas, Aliko Dangote handed over a strategic department of his conglomerate to his daughter Halima, Femi Otedola doled out #5 billion donation to his daughter’s foundation for the needy.

Dangote’s firm is the largest household manufacturing industry and the Nigerian vice president Professor Yemi Osinbanjo remarked that Femi Otedola’s gift of #5 billion to Cuppy’s foundation which is an affiliate of save our children foundation in the U.S.A, is the biggest single individual donation to a charity in Nigeria.

These two stories gladden my heart and are direct affirmations that this is the time of the Nigerian girl child.

The story of Halima Aliko Dangote is that she has been appointed as the group executive director, commercial operations of Dangote Industries Limited.

According to a release by the company, Halima Aliko Dangote is returning to the company after serving on secondment in several capacities across two of its business units over the last five years.

She is also a trustee of the Aliko Dangote Foundation, the philanthropic arm of the conglomerate.

Her most recent role in the group was as the executive director of Dangote Flour Mills.

She has over 12 years of professional experience and has held several executive management roles. In her new role, Dangote will be responsible for leading the development and implementation of the Dangote Group’s customer strategy to drive customer growth, improve customer relationship management, enhance customer experience and increase long term customer value.

She will also be responsible for the implementation of the group’s shared services strategy with specific oversight for the following functions; commercial, strategic procurement, administration and branding & communications.

Halima, who is the second daughter of Aliko Dangote, holds a bachelors degree in marketing from the American Intercontinental University, London and a master’s degree in business administration from Webster Business School, United Kingdom.

Halima is the president of the board of The Africa Center in New York, a uniquely focused centre providing a forward-looking gateway for engagement with Africa while encompassing policy, business and culture. She is a board member of Endeavour Nigeria and is also a member of the Women Corporate Directors (WCD).

Relatedly, Dangote's friend Femi Otedola has a daughter named Florence Ifeoluwa Otedola, famously known as DJ Cuppy, who is a musician and entrepreneur with a rapidly increasing empire.

Information gleaned from her official website says she was born in Lagos, Nigeria in 1992, just as Cuppy’s musical endeavours began at a young age.

Accordingly to official information, by the time she turned 18, whilst attaining a BSc Economics at Kings College London, she was already producing her own tracks and DJ’ing around the world. To this date, Cuppy’s DJ skills have taken her to over 25 countries and she continues to fill dance floors across the globe.

Cuppy’s open-format DJ style and unlimited genre catalogue takes audiences on an exuberant journey. She is praised for her ability to seamlessly fuse commercial hits with innovative remixes, relating with any diverse crowd. With her lovable personality and undeniable hard work ethic, she has quickly risen and continues her pop-cultured supreme lead role as a global pan-African brand.

In 2014, Cuppy released her first compilation House of Cuppy, which saw her pioneer a fresh new sound she dubbed “Neo-Afrobeats” -an electric blend of Tropical House and Afrobeats music. The compilation was launched successfully in London, New York and Lagos, and the following year was succeeded by an 8-country tour, Cuppy Takes Africa, now a TV show on FOX.

Having been featured by the likes of Forbes, Vogue, and the Financial Times, Cuppy has worked with some of the biggest and most exciting international organizations. Jumpstarting her US invasion in 2015 with an internship at Roc Nation, she performed at SXSW Festival and starred as the resident DJ on MTV’s ‘Uncommon Sense’ Show; all whilst attaining a Masters in Music at New York University.

Now based in London, Cuppy is making a triumphant return to the UK’s music scene and is certainly one to look out for. But importantly, her foundation named Cuppy is in the news for the very positive vibes of her passion to help the needy and homeless children of North East of Nigeria ravaged by war. At the weekend, Abuja went agog with a fund raise which she staged and together with a UK registered charity, she netted in lots of cash.

Her father introduced by the Punch newspaper as a business mogul, Femi Otedola, had donated N5bn to the Cuppy Foundation, a philanthropic project of his daughter, Florence Otedola, popularly known as DJ Cuppy.

Mr Otedola, who was represented by another of his daughters, Tolani, made the announcement during the ‘Gold Gala,’ an event by his daughter at Transcorp Hilton Hotel, Abuja, on Sunday.

Tolani said, “My father, Mr Femi Otedola, has been at the forefront of supporting worthy causes. It is in this spirit that he will be donating the sum of N5bn to the children of Borno, Adamawa and Katsina through Save the Children.”

Cuppy’s godfather, Dangote, who is the owner of the Dangote Group, also made a donation of N100m.

Dangote said, “It gives me great pleasure to be here supporting my brother, Femi. I believe we need more Nigerians to have big hearts to give back to the needy.”

“To Cuppy, I must congratulate you for having a big heart to visit those children in Borno. She spent about four days with them. In the light of this, I am making a donation of N100m.”

The young philanthropist, who is also an ambassador of the Save the Children UK, a non-governmental organisation, said her foundation, which was launched in August 2018, was inspired by a trip to Maiduguri, Borno State.

According to Miss Otedola, she started the foundation as a way of giving back to the less fortunate.

Nigeria's Vice President who was thrilled Mr. Yemi Osinbajo told the guests that the event must refocus their minds on caring for the poor and malnourished especially in Nigeria.

According to the Vice President, in 2015, Buhari proposed the “largest social investment programme in Africa” of about N500bn annually.

He added, “Yet we are far from where we ought to be. It is obvious that government cannot do it alone. So, we don’t (all) need to be billionaires (to do our part). It is time for every one of us to decide to make a difference to ensure that the poor and vulnerable are given a decent life.”

If anyone is in doubt that our girls have arrived, then look at Anambra state whereby two females Stella Oduah and Uche Ekwunife defeated many great men to emerge as SENATORS. Look at Senator Olujimi of Ekiti who defeated men to become a Senator. Look at the youngsters all ladies, about two of them who are today Ministers in the Federal cabinet of President Muhammadu Buhari manning ministries of transport as minister of state and that of Humanitarian Affairs as minister. Look at the newspaper houses whereby a lady Mrs Maiden Ibru has done wonders by retaining the media legacies of her late husband. Our girls have arrived. No more room for gender discrimination please.