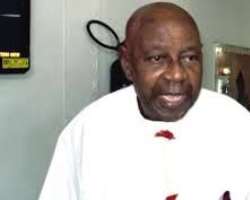 After the collapse of the Second Republic via a coup d’etat which brought the then Major-General Muhammadu Buhari to power now the nation’s President, a panel of inquiry was set up to investigate the activities of corrupt politicians. It was discovered that former Vice-President Dr. Alexander Ifenayichukwu Ekwueme who was kept under house arrest left the government far poorer compared to when he entered. Some of his critics contended that since he was extremely wealthy as the nation’s pioneer indigenous architect, there was really no need for him to plunder the treasury. But what do you make of relatively wealthy politicians who still looted the public till in their insatiable quest to expand their political and economic empires?

Ekwueme was clearly an exception to the rule but where are other Ekwuemes in the highly corrupt Nigerian polity? Thankfully, there were still a few others and included on that list was the now late Professor Tamunoemi Sokari David-West fondly referred to as the poorest Nigerian former minister because of his honesty, forthrightness and commitment to the public service of the nation.

His rich intellect made him an attractive catch to the policy makers who greatly tapped from his wealth of wisdom and he became the Commissioner for Education in his native Rivers State in 1975. As Commissioner, he built so many schools and instituted a sturdy educational framework for the educational development of the state as the state suffered a bit of educational backwardness as a result of the Nigerian civil war. He took the welfare of teachers very seriously being one himself and his firm belief that their reward should commence here on earth.

He garnered a lot of goodwill from his patriotic and visionary leadership which made him get elected to the Constitution Drafting Committee that drafted the Nigerian 1979 Constitution popularly known as the Council of the fifty wise men under the chairmanship of Legal luminary, Chief Frederick Alade Rotimi Williams (SAN).

As a member of the Committee, he did his best to fashion out a workable constitution that would accommodate the diverse interests of the multi-ethnic nation amidst a shift from the parliamentary system of government to the American styled presidential which has been the mainstay of the country’s democracy since then.

He returned back to the academia after the work was concluded and did his bit to mould young minds that flocked to him to tap from his endless reservoir of wisdom and knowledge.

After the fall of the Second Republic in a coup led by the then Major-General Ibrahim Badamosi Babangida which brought Buhari to power on December 31st1983, he was headhunted from the Ivory Tower and made the Minister for Petroleum and Energy. In his first media briefing, he confessed that he knew next to nothing about the petroleum industry.

He didn’t allow the knowledge deficit hinder him from making positive contributions to the industry which lays the golden eggs. He created the enabling environment for the international oil companies to profitably operate in and attracted massive investments into that sector. He was a pride to behold at the Organization of Petroleum Exporting Countries (OPEC) meetings where he represented the nation very well and held his own among the eggheads and stakeholders in the industry.

When his boss was overthrown on August 27, 1985 in a palace coup by IBB, he was retained as the minister for mines, power and steel because the military ‘president’ wanted to use him for public relations purposes and to gather goodwill from the members of the public.

Tragically, he didn’t last long in the ministry as the brutal dictator got rid of him the following year in a Gestapo use and dump style and the soft spoken Professor was slammed with the charge of causing an economic adversity to the nation. He was vindicated five years later when he was discharged and acquitted by the Special Appeal Court on the 8th of August 1991. It was also found out that he didn’t corruptly enrich himself while in office both at the state and federal level despite an avalanche of opportunities to do so.

He was an outspoken and fearless critic of bad governance and spoke the truth to power even at risk of personal discomfort. He was always offering pro bono advice to successive governments on good governance.

As a prolific academic his works were published in many local and international journals. His writings weren’t limited to his discipline as he contributed copiously to national discourse on the pages of many Nigerian newspapers.

He will be greatly missed and may the Good Lord grant his soul eternal rest from life’s labours.