Ethiopia Offers Window on the History of Humanity 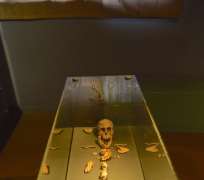 There is a strong basis for the tourism slogan "Land of Origins," when one considers the roots of humanity and the opportunity to experience it in Ethiopia.

The debate about the age of the human race has been heavily debated since the beginning of recorded history and scientific results are often in conflict with the narrative of religious doctrine.

In Ethiopia, there is clear proof that humanity has its foundation millions of years ago. In the National Museum of Ethiopia in Addis Ababa, two skeletal remains of Ardi pr Ardipithecus ramidus, a 4.4 million-year-old female, is in the display case adjacent to Lucy or Australopithecus afarensis, a 3.2 million-year-old female, which had been the oldest skeleton ever found until 2009.

Lucy was discovered in the Afar depression in Ethiopia near Hadar in 1974 and was determined to a hominid, closer to mankind than apes. An analysis of the foot, leg, and pelvis bones of these skeletons showed that they could have walked standing upright, carried items, and manipulate them better then a chimpanzee. The skeletal remains of Lucy, a 3.2 million-year-old hominid discovered in Ethiopia in 1974 are displayed in the National Museum of Ethiopia in Addis Ababa.

According to Tim White, a University of California-Berkeley professor of integrative biology who was a co-director of the Middle Awash Project, these two skeletons represented "a detailed snapshot of one of the earliest hominids and what Africa was like 4.4 million years ago."

"Being able to see Lucy and Ardi at the Ethiopian National Museum and visiting the dig site near Hadar are extremely popular elements in our tours," said Desale Mitiku Asfaw, CEO of Grand Holidays Ethiopia Tours. "We are very excited that a new discovery this past August of a 3.8 million-year-old skull from the same region will give further proof on when humans first walked the earth. We are already including this discovery in the narrative of our tours, which visitors already had found fascinating."

Ethiopia was determined to be the country with the biggest tourism growth in 2018 by the World Travel and Tourism Council with a 48.5% increase over 2017, which is now seeing even more interest since Ethiopian Prime Minister Abiy Ahmed won the Nobel Peace Prize this year.