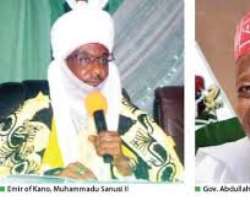 The Director-General, Media and Communications of the Kano State Government, Salihu Yakasai, has told the Emir of Kano, Muhammad Sanusi II, to shut up his filthy mouth.

Yakasai, who was responding to the position of the Emir on the abduction of some children in Kano, who were eventually located in the South East, spoke on his Twitter handle on Sunday.

Sanusi had on Saturday said Igbos should not be attacked over the abduction of the children, who had been given Igbo names before their rescue.

Rather, he blamed the parents of the children for the incident, insisting that many northern parents had the bad habit of allowing their children roam the streets to beg, thereby making them vulnerable to kidnap.

But Yakasai thought otherwise when he tweeted: “A very reckless comment to make. I wonder if any of his relatives get kidnapped or stolen, he will act the same way. The kids are not almajiris for goodness sake. SLS (Sanusi Lamido Sanusi) should have kept quiet instead of opening his filthy mouth to make such insensitive remarks. Nonsense!”