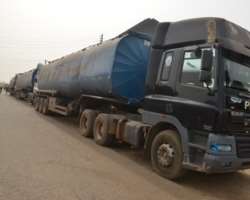 In a legally controversial move, the Federal Government has directed that petroleum products should not be supplied to fuel stations within 20 kilometres of the nation’s international borders.

The fuel supply restriction was communicated from the Nigeria Customs Service Headquarters in Abuja to all formations across the country. The Comptroller General, Nigeria Customs Service, Col. Hameed Ali (Rtd.), issued the directive in a memo dated November 6, 2019, titled, “EII/2019/Circular No 027 Suspension of Petroleum Products Supply to Filling Stations Within 20 Kilometres of all Borders,” on Thursday.

“The Comptroller-General of Customs has directed that henceforth no petroleum product no matter the tank size is permitted to be discharged in any filling station with 20 kilometres to the border,” the memo signed by Chidi A., the Deputy Comptroller General for Enforcement, Investigation and Inspection, read. “Consequently, you are all to ensure strict and immediate compliance, please.”

At least 57 borders have been shut across Nigeria since August as the government intensified steps to curtail smuggling activities from neighbouring countries like Benin, Niger, Ghana and Cameroon.

Observers note that the border closure is already taking a toll on the nation's economy with citizens complaining about shortage of essential products.

An NNPC report earlier in April, had raised the alarm about the increasing number of filling stations in border towns saying they are funnels for fuel smuggling to neighbouring countries. It revealed that 16 states, having a total of 61 LGAs with border communities, account for 2,201 registered fuel stations and a combined capacity of 144,998,700 litres of petrol.

It has long been reported that most of the petrol meant for the Nigerian market are often smuggled to neighbouring African nations at higher prices.

Meanwhile, the move has elicited support from the General Secretary of the Nigerian Union of Petroleum and Natural Gas Workers (NUPENG), Afolabi Olawale, who said the Union was in support of the directive.

“The only explanation would be that they are being used as conduit pipe through which smuggled petroleum products are taken out of the country," Olawale said.

However, IPMAN National Vice President, Alhaji Abubakar Maigandi, said that the measure will bring more hardship to the residents in the border towns. He added that implementing the directive will short-change the marketers that are duly licensed by the Department of Petroleum Resources (DPR) to sell petroleum products in that domain.

Other stakeholders have queried the propriety of the directive on the basis that the Customs boss lacks the authority to make such pronouncements which fall under the purview of the DPR.

Human Rights Lawyer, Femi Falana, SAN, reacting to the directive said: “Since we are operating under a constitutional government, the Federal Government has no power to impose collective punishment on law-abiding citizens and corporate bodies. The filling stations were registered under the law by the Directorate of Petroleum Resources (DPR). So, the CGC Alli lacks the power to ban them from carrying out their legitimate business.”

The DPR spokesperon did not respond to inquiries sent via email in a bid to validate Falana's position.

Recall, the Nigerian National Petroleum Corporation (NNPC), Nigeria Customs Service and the DPR agreed to inaugurate a Joint Committee to tackle the growing incidents of petroleum products smuggling across the nation’s border towns,