Rivers Apc Crisis: Why I Went To Court - Abe

...Says, "No One Can Rewrite History"
By Abe Media Aide 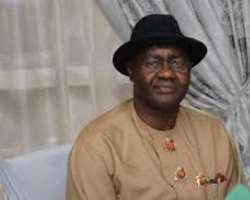 The immediate past representative of Rivers South-East Senatorial District at the National Assembly, Senator Magnus Ngei Abe has given reasons why he went to court against some persons who wrote libelous stories against him in the media.

Abe, in a statement he personally signed titled, "Rivers APC Crisis: No One Can Rewrite History," said Nigerians are aware that the crisis in the APC in Rivers State had its origin in the unconstitutional decision of the leader of the party in the State, Rt. Hon. Chibuike Rotimi Amaechi to summarily expel him, and other leaders of the party in the state that were sympathetic to his Governorship ambition for no discernible reason.

The senator further stated that the Minister's directive to unilaterally exclude party members from all party activities without due process is also the origin and the root of the Crisis in the party.

He said: "Indeed prior to the troubled congresses the then State Chairman of the party, Chief Ibiamo Ikanya called an all-inclusive stakeholders/state SEC meeting of Rivers APC where all the issues were amicably resolved, including the distribution of forms to all aspiring party members.

"An all-inclusive committee was set up to implement the resolutions of that meeting, as soon as the Minister was informed of this move, he not only dissolved the Committee but he voided the efforts and consensus decisions reached by the entire leadership.

"The Minister directed that in keeping with his earlier directives at the Dome, members of the party perceived as sympathetic to Senator Abe be excluded from the Congresses and denied the forms they paid for".

The former Chairman, Senate committee on FERMA at the 8th National Assembly said those members, Ibrahim Umar and 22 others who went to court, rightfully secured an injunction on the facts but again the Minister directed the party to disobey. The rest as they say is history.

Abe stated that he approached the courts because in an unprecedented sponsored media campaign, the facts were buried and recrafted by one Eze Chukwuemeka Eze, a hired publicist for the minister who became the face of the attempt to rewrite history.

He said: "Those who went to Court were accused of working for Governor Wike and the PDP, the courts were promoted as Wike’s supermarkets, some of Amaechi’s publicist such as Oby Ndukwe, and Lucky Worlu went as far as accusing me of plotting with the Vice President to kill President Buhari and collecting billions of Naira from Governor Wike and the PDP to destabilize the APC in Rivers State.

"I was painted to the Nigerian public as a desperate politician who destroyed his party because of his personal ambition.

"These false and baseless allegations moved beyond the social media and became accepted as truth to a point where credible media like THE NATION NEWSPAPER and THE VANGUARD were confident enough to carry this smear campaign on their pages and give it legitimacy and credibility.

"It is for this reason that I have instituted Suit No. PHC/3314/2019 - SENATOR MAGNUS ABE VS. 1. CHIEF EZE CHUKWUEMEKA EZE 2. VINTAGE PRESS LIMITED (Publisher of the Nation Newspaper) 3. DELE ADEOLUWA 4. BISI OLANIYI.

"Also Suit No. PHC/3663/2019 - Senator Magnus Ngei Abe vs. 1. Sir (Hon.) Lucky Worluh. 2. Vanguard Media Limited (Publisher, Sunday Vanguard). 3. Davies Iheamnachor (Reporter, Sunday Vanguard). 4. Wale Akinola (Editor, Sunday Vanguard), to give an opportunity to those who have made these allegations in an effort to rewrite the history of the Rivers APC Crisis to come before the courts, and the public and present the facts on which they stand.

"My integrity and reputation remain my most valuable assets, if I lose that to the politics of hate and deceit then I would have lost everything.

"My lawsuit, therefore, is not intended as a war against any media house, it is rather an open challenge to those who have peddled falsehood when they know the truth to now present the facts behind their falsehood or forever be ashamed to silence."

The senator appealed to all men of goodwill to remember that all the gold on earth is worth nothing, "if we lose our name" and pleaded for cooperation and understanding from all in view of the matter.