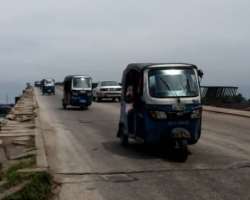 Inspite of several pleas from well-meaning Deltans, road users and other commuters who ply the over 40 years Udu Bridge, Udu local government area of Delta state for total reconstruction in the last four years, the state government has continuously paid deaf ears to the now near collapse bridge.

The bridge which was constructed in 1973 and was later completed and commissioned in 1975, has witnessed exodus movement of people especially heavy duty vehicles from Warri and other towns to access Ovwian, Aladja DSC steel company plant and other towns closer to it

Udu is connected to Warri, a cosmopolitan city and Delta State largest commercial city through Enerhen by the Udu Bridge over the Warri river.

Commuters and some other road users who ply the bridge daily who spoke to our correspondent, expressed worries over the lack of attention given to the bridge after several complaints about the failure of the strength of the bridge.

Mr. Tony Amaete and other commuters plying the bridge called on the state government to reconstruct the bridge instead of the maintenance that has yielded no meaningful result, noting that commuters would make use of alternative routes to serve as palliative measure while the recontruction last.

They however wondered why the government have not shown any concern despite the outcry from road users on the bridge four years.

The Udu bridge accommodates thousands of people and goods, heavy trucks on daily basis moving to adjoining towns such as Orhuwhorun, Otor Udu the council's headquarters, Otu-Jeremi, Ogbe-Udu, Okwagbe, Ogbe-Ijoh in Warri South-west and others.

There is palpable fear that these communities may just be cut off if it finally collapse as it would affect socio-economic human activities.