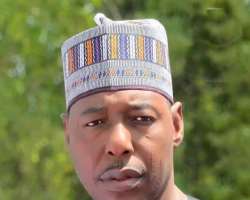 Borno State Governor, Prof. Babagana Umara Zulum has said that his government will soon commence demolition of structures blocking waterways and drainages across the state.

The governor who was represented by the Deputy Governor, Alhaji Usman Umar Kadafur stated this Saturday at the flag-off ceremony of monthly sanitation exercise in the state.

He added that the blockage has resulted in the flood which has been causing severe havoc to residents of many neighbourhoods especially in the state capital, Maiduguri, as many of the waterways have been blocked by illegal structures.

Zulum further explained that the present administration decided to reintroduced the monthly sanitation exercise in order to prevent the seasonal outbreak of waterborne diseases and other environmental ailments like pollution.

It will be recalled that the monthly sanitation exercise was suspended 26 years ago during the military era.

Also speaking at the event, the Borno State Commissioner of Environment, Engr. Kabiru Wanori said, “It is a known fact that a clean environment is essential for healthy living, therefore it is paramount to keep our environment clean to avert the spread of communicable disease caused as a result of filthy environment.”