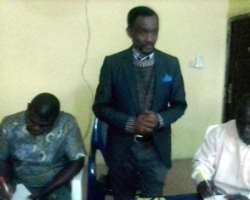 The Association of Nigerian Authors (ANA), has vowed to bring to book publishers, booksellers, ministries of education and their likes who makes things difficult for writers.

Addressing journalists Tuesday in Asaba, Mr. Chike Ofili, a presidential aspirant for ANA election, disclosed that among other things in his black box, is a body of ANA legal defenders that would make some stormbbling blocks a scalp goat.

Hear him: "I am coming to the place for a major battle. I am going to make them uncomfortable. Among my plans, there is going to be a body of legal defenders that will take it up with these set of people. Enough is enough", he threatened.

He said writters are endangered in the hands of publishers, alleging that they connive with pirates to sabotage their works, education ministries, where the books are recommended for use in schools.

"The ministry will not have the courtesy to tell the writter that his/her book has been recommended for use in schools".

He lamented the situation where students from the foundation stage finishes from primarily one to six, yet could read or write.

"Are you aware that some teachers are wasting our children, especially those in primary schools who don't know how to read and write? Those in schools are more wasted even than those out of school. Such teachers should be sacked and made to pay the backlog of salaries they have received in that six years".

He promised that his ANA-led executive would address the problem of literacy by identifying with religious groups and residential estates to address literacy deficiencies.

He also noted that to bring back the pride of ANNA'S 38 years of existence, his leadership would serve the Nigeria Please Association and others who he alleged have been robbing them of their remuneration letters of notices to stop reaping where they did not sew.