Nasiombe’s Review of the Squatters Tale was Exemplary 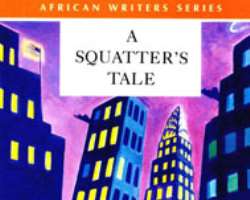 Phelix Mulunda Nasiombe reviewed Ike Oguine’s book the Squatter’s Tale in the most exemplary way. The review was published in the Saturday Nation on 21st September 2019.It was simple, very enticing, objective and factual. Though the review was brief, it had all the ideas, themes, plots and styles used in the book. In fact, reading Nasiombe’s review of Squatters Tale was just like reading the entire book in less than five minutes.

Two more virtues are also evident in Nasiombe’s review of the Squatters Tale. The first one is absence of selfish comments about the book. Nasiombe let the facts to speak for themselves by uncovering the events, global lessons and issues that call for attention in the book. The second virtue evident in Nasiombe’s review of the Squatters Tale was absence of reviewer’s consciousness about politics of identity in the choice of the book for reviewing. This virtue is appreciated under the light that there has been some bit of tradition among Kenya’s students of literature as well as literary scholars to review those books with which they have cultural and ethnic connection. But Nasiombe did not fall victim to this cultural syndrome that always prevail in the spaces of socialized politics of identity. Nasiombe was mauverick and very objective in a cultural sense and intellectually neutral in his choice to review Oguine’s book which also discusses globally touching issues like plight of poverty among Africans in the diaspora, shrinking jobs on the African job-market, betrayal, onomastics, economically forced migration, racism, gender, xenophobia, fatalism, human expectations, socio economic dilemma of Africans in the western world and other pertinent issues like the deliberate disrespect by the Western employers for the Africans educated in Africa. I mean, this was work worth the name good literary appreciation.

When writing about challenges of literary appreciation and criticism in an introduction to Professor Mwelesi’s Mind and Styles of Okot P’ Bitek in the Song of Lawino, Chris Wanjala pointed out that the key shortcoming in practice of literary appreciation and criticism in Africa is a culture of ‘barbarous pedantry’ among literary scholars. I believe Wanjala meant that literary scholars often end up in prolix fits of self-congratulation and praise of their own academic history instead of writing insightful, informative, and objective appreciation or reviews of the literary works. This is the point which Angus Calder supported in his Introduction to Chris Wanjala’s Stand Points on African Literature by arguing that good writers need good literary critics for honest criticism and appreciation. And indeed it is a fact that Nasiombe and as well as the very worthy editorial service to literary journalism at the Saturday Nation have effectively introduced Oguine’s Squatter’s Tale to an average Kenyan reader.

Somewhere else in the living history of literature, it is on record that bad literary criticism and appreciation was compared to a horse-fly or an ox-whip by Anton Chekov, that what it does is only to distract the horse or the ox from pulling the plough. But good criticism and appreciation like the one evinced on Nasiombe’s review of Squatter’s Tale is like salted fodder, it enables the ox to keep on pulling the plough.

Having said, it is worth my reader’s moment to mention that good literary journalism need to shed light on two sides of literary work it is examining. This is a virtue that un-expectedly slipped through the fingers of Nasiombe while reviewing the Squatters Tale. There are also other basic concerns and requirements for literary criticism like sharing the cover page of the book under discourse, mentioning the publisher of the book, mentioning the current local retailer and as well as the retail price of the book which Nasiombe forgot to mention for his readers. But this was not a detour in any manner to Nasiombe’s worth-while appreciation and examination of the Squatters Tale. At the end of his work, Nasiombe signed of as a master’s student of literature, a lesson enough for us the lovers of literature, we have a duty encourage him, not all master’s students in the current times can do such a good job. Kudos Nasiombe.