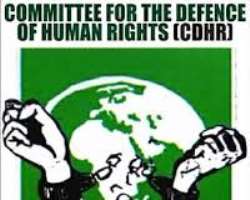 Nigeria’s oldest human right organization, the Committee for the Defence of Human Rights, (CDHR) in Abeokuta at the weekend has elected foremost lawyer and activist, Dr Osagie Obayuwana as its new President, Irohinoodua learnt on Monday.

Osagie of Benin origin was overwhelmingly elected unopposed by the CDHR delegates from many of the 36 states of the Federation. The election took place during the group’s Annual General Meeting, (AGM). Osagie who was a pioneer member of CDHR is believed to be in a strategic position to not only sustain the glowing reputation of the CDHR but to also promote its core values.

Obayuwana, widely known to be honest, hardworking and diligent is one of the most respected human right leaders in Africa.

The former President of CDHR, Malachy Ugwumadu ended his meritorious tenue last week. Malachy was reputed to have revived the ailing organization which had established itself as one of Nigeria’s most outstanding civil society organisations having been established in the tough era of military rule in 1987. Following years of a glorious outing, the CDHR was hit by internal crisis about a decade ago from which it was difficult for the group to recover until Malachy took over the leadership.

Malachy brought back the organization from its ruin, reviving old chapters, healing wounds and launching an unprecedented renaissance which once again brought the organization into the purview of public consciousness.

“Malachy left a greater organization. CDHR has bounced back fully under his leadership. He taught us that nothing is impossible. He is a remarkable leader with golden fingers. He brought CDHR from a near ruin. We have no doubt that with the emergence of Osagie Obayuwana as the new President, the golden legacy of Malachy will be sustained and even surpassed,” Ade Ikuesan an official of the group told Irohinoodua in Abeokuta.