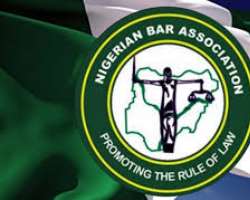 The Nigeria Bar Association (NBA), Borno State Chapter has in strong terms detested and condemned the unlawful detenion of one of its Member, Barrister Sadiq Abubakar Kachallah for more than 14 hours and refused him bail when the Chairman and other executive members of the legal association phoned him.

Borno NBA has also threatened and declared to drag the DPO, CSP Muhammed Bulama to court to seek justice and avert future reoccurrence.

The NBA State Chairman, Borno State, Barrister Mohammed Umar stated this at a press briefing with journalists at the Bar Conference hall, Bar House, NBA Maiduguri Office Saturday added that the association will on Monday, 28th October, 2019 mobilize all it's members to professionally dress and assemble at the DPO's office to address him on his illegal actions before they will proceed to the Borno Command Police Headquarters to intimate the Commissioner of Police, CP Mohammed Aliyu Ndatsu and finally file a suit at a competent court of law against the illegal and unconstitutional detention of their member.

Barrister Umar further explained that whatever may be the case, the Bar has decided to drag the matter to court for injustice and unlawful as well as unconstitutional act while noting that the failure or refusal of the DPO to release the member on bail to the NBA when approcahed without any remorse and continuous detention of the lawyer without food and allowing the lawyer to observe his daily obligatory prayers since he was detained was immoral and inhumane not only unconstitutional.

He said the reason behind the detention of their colleague according to narration of the victim, Barrister Sadiq Kachallah who was at the GRA Police Station to bail his client but ended up being detained by the DPO after the DPO ordered for the release and freedom of his client and out of exchange of words or argument involving bailable statements, the DPO ordered his subordinates to lock the lawyer up on Friday.