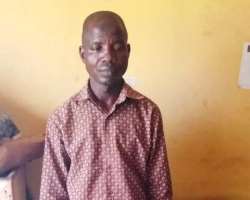 A 56 year old fake doctor, Salahudeen Jamiu has been arrested by police in Ogun State for carrying out an abortion that led to the death of a pregnant housewife.

The suspect was arrested following a report by the husband of the deceased who reported at Onipanu Police Division that he received a call from one Dupe Odebunmi who claimed to be a nurse that his wife one kehinde Olakitan was sick and on admission at Mojisola Maternity clinic belonging to the suspect.

He stated further that on getting to the clinic, he found nobody there, but on his way back home, he discovered the corpse of his wife in front of a building close to his house.

The Police Public Relations Officer of the Command, SP Abimbola Oyemi told The Nigerian Voice that "upon the report, the DPO Onipanu division SP Magdalene Adeniji detailed her detectives to launch a serious manhunt for the Operator of the Maternity and their efforts yielded positive result when the suspect was arrested on the 24th of October 2019."

On interrogation, the suspect admitted carrying out an abortion on the deceased who was brought to him by her friend, Dupe Odebunmi and that the deceased, a mother of four died in the process.

He confessed further that it was out of fear that made him dumped her corpse in the frontage of a house close to the woman's residence.

The corpse of the deceased has been deposited at general hospital ota mortuary for autopsy.