Maina, Son To Be Arraigned Today By EFCC On Money Laundry Charges 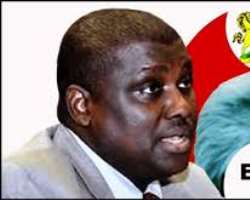 The anti-graft agency has preferred 12 counts bordering on money laundering, operating fictitious bank accounts and fraud against him.

Also to be arraigned today, in same court on a separate but similar charges is his son, Faisal.

EFCC said Maina and his son would be arraigned before Justice Okon Abang.

Recall that another judge of the Federal High Court, Justice Folasade Giwa-Ogunbanjo, had on Tuesday granted an interim forfeiture order on 23 landed properties traced to Maina.

The court also gave an order directing the publication of the order of interim forfeiture in a national daily newspaper.

The motion was brought pursuant to section 17(1) and (3) of the Advance Fee Fraud and Other Fraud Related Offences Act 2006.

The property include houses, estates and companies located in Abuja, Kaduna, Borno and Nasarawa states.