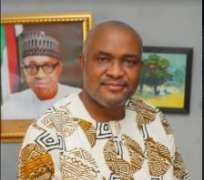 No gainsaying the notorious truth that the election of the Republican outsider and the maverick billionaire Mr. Donald Trump about four years ago as the 45th president of the United States of America changed the global dynamics in the area of worldwide push for globalization of human rights and democracy as it were.

Trump's emergence on the global stage has so far remained localised within the context of the domestic issues directly affecting the United States of America with a virtual shut down of all usually proactive America's roles as the global human rights enforcer either on its own terms or through the platform of the United Nations.

What that means is that president Trump who dethroned the democrats to become the president of the world’s strongest economy and indeed the universal leader in the area of global security, made it abundantly clear that his administration will be all about America first.

His administration so far has made no single move in defence of human rights around the World and has even escalated the DIMINISHING respectability of America as the clear World leader in the spreading of human rights messages and democracy as an ideology around the World even as the wider ramification of this lacuna gave rise to the search for a possible global leader whose passion will also extend to the need to ensure that nations around the globe keep to their binding obligations of respect for the fundamental human rights of their citizens.

Ironically, these past four years have seen the growing phenomena of wars ravaging a lot of countries and the growing populations of refugees who have been constantly on the move in search of security of their lives. Nigeria being one major flashpoint of global terrorism with the large portion of the Country almost as big as France and Belgium put together being hobbled by the war waged on Nigerians by the Boko haram terrorists who have working partnership with the Islamic States terror networks. So Nigeria as a largely war torn and unstable Country contributes largely to the global refugees crises. The failure of United States of America under Donald Trump to play the Universal role as the Global leader who advances peace and human rights has gravely affected millions of Nigerians who live in fear for their lives. The refugees issue is a global phenomenon.

The greater percentage of these refugees come from the developing economies in Africa, Asia and the Middle East. Many have perished from Africa trying to flee into the Western nations through the Meditarreanean Seas off the coast of lawless Libya.

Another type of refugee crisis however became worrisome around the fringes of America with millions of frightened South Americans from some war ravaged and crime ridden countries trekking so far to cross into the United States of America from the borders of USA and Mexico. This phenomenon posed severe logistical nightmare for the Donald Trump’s administration.

Also President Donald Trump has not hidden his disdain for refugees and immigrants and his administration has introduced a rash of executive orders and unleashed immigration officials to fish out illegal immigrants and to repatriate them out of the shores of the United States of America.

It has been reported that some of those immigrants afraid that they could be returned to some of their war ravaged nations by the Donald Trump immigration enforcement authority decided to cross over to Canada to seek for refuge.

These migrants found a good host in the prime minister of Canada Mr. Justin Trudeau who incidentally becomes the only world leader that speaks out in loud defence of the rights of the refugees.

Through his open policies of receiving refugees running from terrorism, war and political persecution in their homelands, the Canadian prime minister perhaps can be compared to the ebullient chancellor of Germany Mrs. Angela Merkel who stands out in Europe as one leader devoted to finding practical solution to the global refugee emergency.

Her decision to provide temporary shelters for hundreds of thousands of refugees from Syria, Iraq, Afghanistan, Sudan and Nigeria amongst others, led to a lot of political setbacks for her even as Germany even started witnessing the resurgence of right wings elements who openly detest the presence of foreign refugees in Germany just as some political parties with such extreme ideology went on to win parliamentary seats.

The internal challenges created by her positive disposition towards hosting refugees have even forced her into what analysts see as early retirement because she has now stated that by 2021 when her tenure is over she wouldn’t seek re-election.

Reuters has even reported that German Chancellor has found a capable successor.

Germany’s Angela Merkel threw her weight behind her embattled new defense minister and heir-apparent while insisting she herself was fit to carry on serving as chancellor through to the end of her term in 2021. Apart from the disenchantment of some voters with her open hospitality for refugees, there have of late being some stories around her health.

Merkel, who turned 65 and has been in office since 2005, has suffered several bouts of shaking at public ceremonies in recent weeks that have stirred speculation about her health, though she has maintained she is fine as reported by Reuters.

On jovial form before taking a summer break, the conservative chancellor said she understood the questions about her health, but told her annual news conference: “I can carry out this role.”

She has no history of serious health issues. Her office has given no explanation for the shaking episodes. After one such bout, a government official told Reuters that it was more a psychological issue as she tried desperately to avoid a repeat.

“As a person, I have a strong personal interest in my health and, as I said, 2021 is the conclusion of my political work,” Merkel told reporters, adding with a smile: “But then I hope there will be another life (after politics)..”

Asked how she was feeling, Merkel added: “Good.”

The chancellor, who has loomed large on the European stage since 2005, is trying to stage-manage a slow-motion exit from politics and in December gave up the chair of her Christian Democrats to protégée Annegret Kramp-Karrenbauer..

Merkel’s “grand coalition” with the left-leaning Social Democrats (SPD) has come close to collapse on several occasions since taking office last year, and SPD leader Andrea Nahles quit after setbacks at regional and European elections in May..

But Merkel played down suggestions that the governing alliance was in trouble, saying she had “very, very trustworthy” working relationships with the SPD’s interim leaders.

The SPD is plumbing new post-World War Two depths in polls as a result of its decision, deeply unpopular with supporters, to prop up Merkel’s government, and is divided over whether to stay in the coalition for another two years.

“We have shown that we are able to act, although to some extent we have to bridge large differences of opinion,” Merkel said, adding that she had “great respect” for the SPD’s process in handling its leadership change.

“That gives me optimism that we can continue to work very well in government,” Merkel said.

An end to the ruling coalition could yet be precipitated by regional elections in three eastern states in the autumn. Polls show the SPD is set to perform poorly.

The looming exit of the German leader means that clearly, only Justin Trudeau of Canada can play the role of the global defender of the rights of refugees given his antecedents. Boris Johnson of United Kingdom is interested majorly in securing a healthy deal for BREXIT. So the Canadian good man who has just won re-election is clearly the global human rights leader.

Prime Minister Justin Trudeau begins his second term facing an increasingly divided Parliament and country, with his rock-star appeal from four years ago diminished by scandal and unmet expectations.

Trudeau was re-elected in a stronger-than-expected showing in Monday's national elections. But while his Liberal Party took the most seats in Parliament, it lost its majority and will have to rely on an opposition party to get anything passed.

Trudeau, 47, prevailed after a series of scandals that tarnished his image as a liberal icon.

Old photos of him in blackface and brown face surfaced last month, and Trudeau was also accused of bullying his female attorney general into dropping the prosecution of a Canadian engineering company.

Also, environmentalists have accused him of betrayal for spending billions to buy the pipeline in a so-far unsuccessful bid to get the stalled project moving again. It has been held up by environmental opposition and court challenges.

Trudeau's positivist role towards human rights reinforces the essence of the Preamble of the Universal Declaration of Human Rights which states thus: "Whereas recognition of the inherent dignity and of the equal and inalienable rights of all members of the human family is the foundation of freedom, justice and peace in the world,

Whereas disregard and contempt for human rights have resulted in barbarous acts which have outraged the conscience of mankind, and the advent of a world in which human beings shall enjoy freedom of speech and belief and freedom from fear and want has been proclaimed as the highest aspiration of the common people,

Whereas it is essential, if man is not to be compelled to have recourse, as a last resort, to rebellion against tyranny and oppression, that human rights should be protected by the rule of law,

Whereas it is essential to promote the development of friendly relations between nations,

Whereas the peoples of the United Nations have in the Charter reaffirmed their faith in fundamental human rights, in the dignity and worth of the human person and in the equal rights of men and women and have determined to promote social progress and better standards of life in larger freedom,

Whereas Member States have pledged themselves to achieve, in co-operation with the United Nations, the promotion of universal respect for and observance of human rights and fundamental freedoms,

Whereas a common understanding of these rights and freedoms is of the greatest importance for the full realization of this pledge,

Now, Therefore The General Assembly proclaims This Universal Declaration of Human Rights as a common standard of achievement for all peoples and all nations, to the end that every individual and every organ of society, keeping this Declaration constantly in mind, shall strive by teaching and education to promote respect for these rights and freedoms and by progressive measures, national and international, to secure their universal and effective recognition and observance, both among the peoples of Member States themselves and among the peoples of territories under their jurisdiction."

The World awaits his leadership activities in the area of human rights promotion and protection.